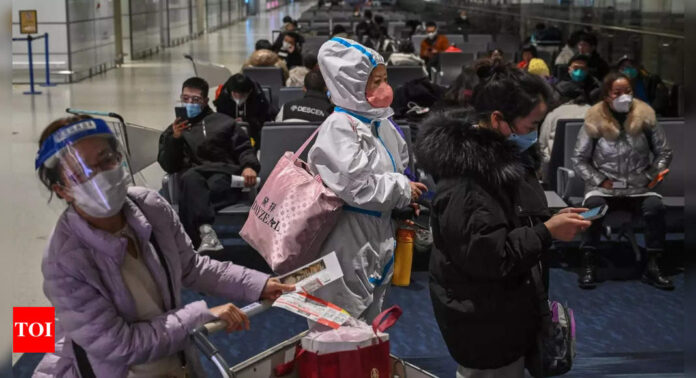 GENEVA: China’s Covid-19 data is not giving an accurate picture of the situation there and underrepresents the number of hospitalisations and deaths from the disease, a senior official at the World Health Organization said on Wednesday.
The UN agency was preparing to meet Chinese scientists again on Thursday as part of a wider briefing among member states on the global Covid-19 situation as concerns grow about the rapid spread of the virus in the world’s No. 2 economy.
On Tuesday, China’s top scientists presented data to a WHO technical advisory group showing no new coronavirus variant had been found in the country of 1.4 billion people.
That might ease some concerns about the outbreak since Beijing abruptly reversed its “zero Covid” policy last month.
But comments by WHO officials on Wednesday were the clearest criticism yet of China’s recent handling of the pandemic. It underscored worries about the accuracy and availability of Beijing’s data, hampering the fight against the disease which has killed more than 6.7 million and roiled global economies.
“We believe the current numbers being published from China underrepresent the true impact of the disease in terms of hospital admissions, in terms of ICU admissions, particularly in terms of death,” said Mike Ryan, WHO’s emergencies director.
He told a briefing in Geneva that the WHO believes the Chinese government’s definition for death is “too narrow”.
“We still do not have complete data,” said Ryan.
Late last month, the world’s most populous country narrowed its definition for classifying deaths as Covid-related, counting only those involving Covid-caused pneumonia or respiratory failure, raising eyebrows among world health experts.
The WHO says deaths should be attributed to Covid-19 if they result from a “clinically compatible illness” in a patient with a probable or confirmed infection, and no other unrelated cause of death – like trauma – is involved.
China has reported five or fewer deaths a day since the policy U-turn. But many Chinese funeral homes and hospitals say they are overwhelmed, and international health experts predict at least 1 million Covid-related deaths in China this year without urgent action.
Abdi Rahman Mahamud, director of the WHO’s alert and response coordination department, cautioned there may be another wave of infections as families gather for China’s Lunar New Year holiday in a few weeks – one of its busiest travel periods.
He said vaccination rates needed to increase and people should wear masks to protect themselves from infection.
But the WHO said there is “no inevitability” in terms of predictions of large numbers of deaths.
“It really does depend on the measures that are in place,” said the WHO’s Covid-19 technical lead Maria van Kerkhove.
She said the WHO was working with China to improve access to life-saving tools and cope with health workforce issues in badly-hit areas.
Earlier in the briefing, WHO Director-General Tedros Adhanom Ghebreyesus reiterated that the agency is “concerned” about the surge in Covid-19 infections in China and again urged Beijing to deliver rapid and regular data on hospitalisation and death there as well as real-time viral sequencing.
“WHO is concerned about the risk to life in China and has reiterated the importance of vaccination, including booster doses to protect against hospitalisation, severe disease and death,” Tedros said.
With viral circulation in China so high and comprehensive data not forthcoming, he said it is understandable that some countries are taking steps like testing travellers arriving from the country to protect their own citizens.