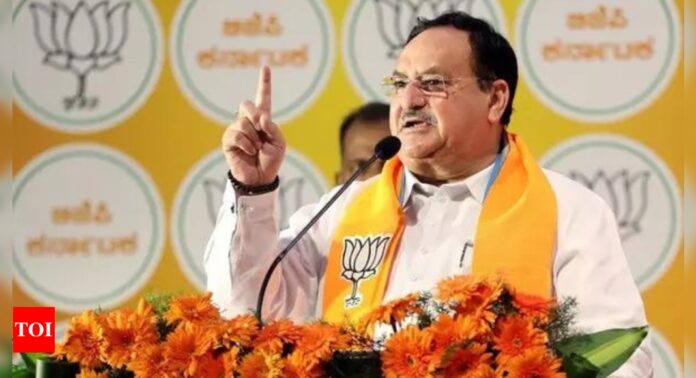 NEW DELHI: Bharatiya Janata Party (BJP) chief JP Nadda during the National Executive meeting said that the party has to win all nine state elections this year and then general elections in 2024.
BJP MP Ravi Shankar Prasad on Monday briefed the mediapersons about party president JP Nadda’s speech on the first day of the National Executive meeting.
Addressing a press conference, Prasad said, “BJP chief JP Nadda said in the National Executive meeting that 2023 is very important and we have to fight and win nine state elections this year and then general elections in 2024.”
Prasad said Nadda called upon the entire executive to gear up for the elections to ensure victory in all nine States.
“BJP chief also discussed recently concluded polls and that Gujarat’s victory was historic and unprecedented. About Himachal polls, he said that we were supposed to change the tradition of changing government but we could not do that,” Prasad said.
He said 72,000 booths were marked in 100 Lok Sabha constituencies across the country where BJP was weak and where the party had to reach. “But reached 1.30 lakh booths and make people aware of the policies of the party,” Prasad said.
He said in the BJP National Executive meeting, Nadda highlighted the Panch Pran given by PM Modi which includes freedom from traces of the colonial past, holding pride in Indian tradition, commitment to making a developed India, unity in diversity, and making citizens responsible towards the nation.
Prasad said that on the occasion of the completion of 200 years of Dayanand Saraswati, birth, BJP will organise a grand programme in February.
He said the BJP chief also highlighted the work culture of New India citing the example of the COVID vaccination programme.
“Putting an end to the past of slavery, we changed the ‘Rajpath’ which lasted for 75 years to ‘Kartavya Path’. Taking pride in our traditions, we built the Kashi Vishwanath Corridor, Mahakal Lok Corridor, restored the glory of Kedarnath and now the Ram Mandir,” the BJP leader said.
Quoting JP Nadda, Prasad said the BJP chief remarked that India has overtaken Britain to become the world’s fifth-largest economy. Not only that, India has become the second largest manufacturer of mobile phones and more than 95 per cent of mobile phones used in the country are made in India.
He said Nadda highlighted the fact that India is making semi-high-speed trains. India’s fintech movement now contributes to 40 per cent of digital transactions worldwide.
“This shows our resolve towards Make in India and making a developed India. Our resolution of a developed India seems to be coming true,” he said.
Quoting Nadda, Prasad said Defence deals during the BJP government are being done with complete honesty. “Border roads have been built up to 3,600 kms while the Defence Minister of Congress did not want to do so,” Prasad said.
Prasad said Nadda suggested that the BJP machinery learn from the Gujarat polls victory. He said Nadda asserted that BJP workers are working hard in Telangana and the party is confident to register a victory in the southern State.
“During his address in the National Executive meeting, Nadda noted that it is for the first time that India’s President comes from a tribal community and the deprived class has been respected by our party,” he said.
Ravi Shankar Prasad also cleared the buzz about the extension of the BJP president Nadda’s tenure. He said, “There was no discussion on Nadda’s tenure as BJP president which is scheduled to end this month.”
The two-day National Executive meeting of the Bharatiya Janata Party (BJP) started on Monday at the NDMC Convention Centre in Delhi.
Prime Minister Narendra Modi, BJP national president JP Nadda, Union Ministers including Home Minister Amit Shah, Chief Ministers of BJP-ruled States and other senior party leaders also participated at the key meeting.