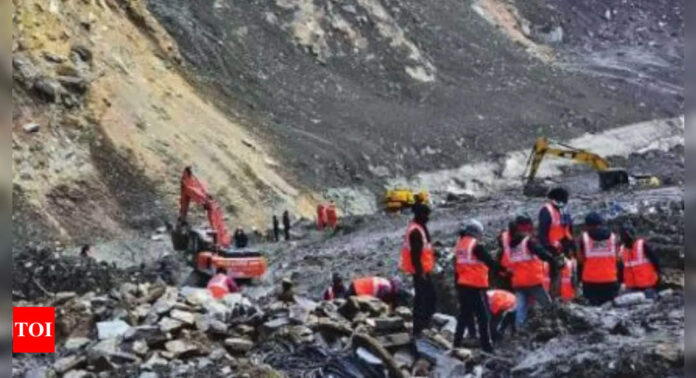 The picturesque district of Chamoli, spread over an area of over 3,000 sq km in the Garhwal Himalayas of Uttarakhand, is home to one of the most visited Sikh shrines, Hemkund Sahib, besides Badrinath, a much-revered pilgrimage place that sees high footfall during the annual Char Dham Yatra.
It also has the Unesco World Heritage site of Valley of Flowers and the charming hamlets of Auli and Chopta that attract national and international tourists every year. The area, which has elevations ranging from 80m to 800m, holds immense strategic value, too, since it adjoins the India-China border and has significant Army and ITBP establishments.
On the flip side, Chamoli is one of the most landslideprone and seismically-fragile areas of Uttarakhand. The district, where the beleaguered township of Joshimath is located, falls in zone V (highest risk zone) of the Seismic Zonation Map of India and is particularly vulnerable to landslides. The area faced a devastating earthquake in 1999 (6. 8 magnitude) that killed over 100 and caused destruction in around 2,000 villages. Experts have been warning that a big quake is due in the region. Despite this a slew of infrastructure projects have been taken up in the area, most of them without taking into account the tectonicallyactive terrain. “Too much disturbance in the geo-tectonically active zone is already resulting in the energy beneath the surface oozing out in various forms – aquifer burst, cracks in houses, sinking of areas and subsidence of roads,” says CP Rajendran, adjunct professor at National Institute of Advanced Studies, Bengaluru.
Among the major projects in the pipeline in Chamoli are a helipad at 14,000ft in the buffer zone of Nanda Devi Biosphere at Hemkund Sahib, and redevelopment works at Badrinath under the Centre’s ambitious ‘Badrinath Master Plan’ for turningthe pilgrim town into a ‘smart spiritual town’. Then there are the Char Dham all-weather road and the RishikeshKarnaprayag rail line – projects intended to provide wider road and rail connectivity, respectively, for the Char Dham towns of Gangotri, Yamunotri, Badrinath and Kedarnath.
Experts say the pressure on the Himalayan ecosystem from rampant construction, tunnelling and blasting has already resulted in consequences. The most recent, apart from the Joshimath crisis, was the February 2021 flash flood triggered by a glacial burst that swept away a hydropower project on the Rishiganga river and extensively damaged the Tapovan-Vishnugad hydel project near Joshimath, besides killing over 200 people.
“Unlike many mountain Joshimathchains in the world, the Himalayas are the youngest and most active in terms of tectonics. Constant vibrations during any type of vehicle movement, be it trains through tunnels or SUVs on the allweather Char Dham road, would render the mountain slopes unstable. They will make the slopes vulnerable to slide at the slightest trigger,” points out Rajendran.
DP Dobhal, former glaciologist at Dehradun-based Wadia Institute of Himalayan Geology, says some of the projects are “not only unnecessary but also unacceptable…. Why build a helipad at an altitude of 14,000 ft in an ecologically-sensitive area? Not only would it cause noise pollution, disturbing the wildlife of the area, but also immense pollution. . . glaciers may start sliding or melt early, resulting in disturbance of the overall hydrology. ”
Several local residents, too, are opposed to the projects. Atul Sati, convener of the citizens’ collective Joshimath Bachao Sangharsh Samiti who along with other residents first raised an alarm about the ‘sinking’ of their town in October 2021, told TOI: “The government is pushing its bizarre idea of development by disrespecting the sentiments of locals. Ask anyone in Chamoli if they are happy with tunnelling and excavation of the Himalayas at the cost of their homes and towns. ”