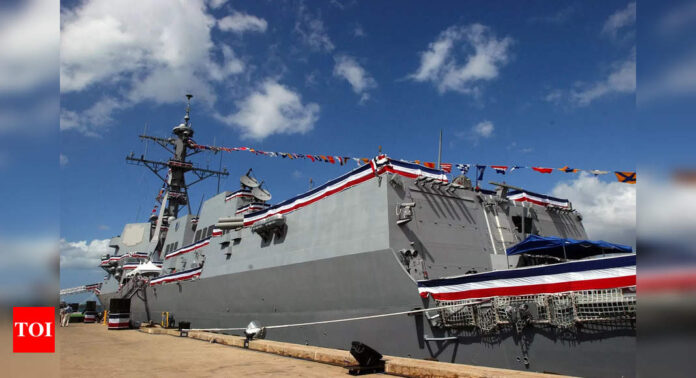 WASHINGTON: A US warship sailed through the sensitive Taiwan Strait on Thursday, part of what the US military calls routine activity but which has riled China.
In recent years, US warships, and on occasion those from allied nations such as Britain and Canada, have sailed through the strait, drawing the ire of China, which claims Taiwan against the objections of its democratically elected government.
In a statement, the US military said the Arleigh Burke-class guided-missile destroyer Chung-Hoon carried out the transit.
“Chung-Hoon’s transit through the Taiwan Strait demonstrates the United States’ commitment to a free and open Indo-Pacific,” the statement added.
In a statement, Liu Pengyu, spokesman for China’s embassy in Washington, said China firmly opposed the move and urged the United States to “immediately stop provoking troubles, escalating tensions and undermining peace and stability across the Taiwan Strait.”
“U.S. warships frequently flex muscles in the name of exercising freedom of navigation. This is not about keeping the region free and open,” the statement said.
“China will continue to stay on high alert and is ready to respond to all threats and provocations at any time, and will resolutely safeguard its national sovereignty and territorial integrity.”
A spokesman for the Eastern Theatre Command of the Chinese People’s Liberation Army said it organised troops to monitor and guard the ship’s transit, and “all movements were under control”.
Taiwan’s Defense Ministry said the ship sailed in a northerly direction through the strait, that its forces had monitored its passage and observed nothing out of the ordinary.
The narrow Taiwan Strait has been a frequent source of military tension since the defeated Republic of China government fled to Taiwan in 1949 after losing a civil war with the communists, who established the People’s Republic of China.
The United States has no formal diplomatic relations with Taiwan, but is bound by law to provide the island with the means to defend itself.
China has never ruled out using force to bring Taiwan under its control. Taiwan vows to defend itself if attacked, saying Beijing’s sovereignty claims are void as the People’s Republic of China has never governed the island.
A Chinese military plane came within 10 feet (3 m) of a U.S. air force aircraft in the contested South China Sea last month and forced it to take evasive maneuvers to avoid a collision in international airspace.
The close encounter followed what the United States has called a recent trend of increasingly dangerous behavior by Chinese military aircraft.