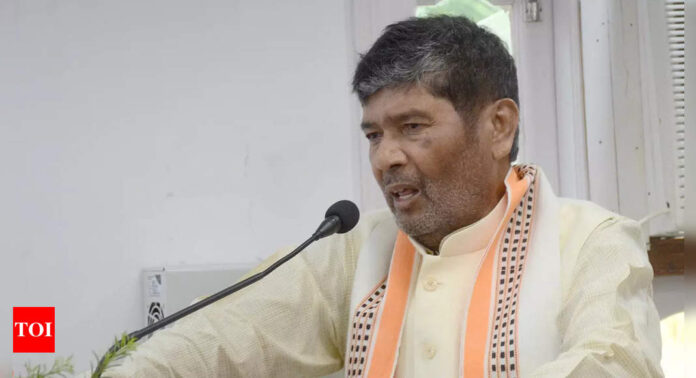 NEW DELHI: Union minister Pashupati Paras on Tuesday met Union home minister Amit Shah in the national capital and discussed issues including the bad law and order situation in Bihar and the Chhapra hooch tragedy.
Paras also requested the home minister about renaming the Hajipur railway station after late Union Minister Ram Vilas Paswan and gave a memorandum to him.
Along with Paras, Rashtriya Lok Janshakti Party (RLJP) state chief Prince Raj and RLJP MP Chandan Singh.
“Today met Union Home Minister cum Cooperative Minister Amit Shah ji in which RLJP State President Prince Raj and MP Chandan Singh spoke to him on various issues including the bad law and order situation in Bihar, the Chhapra liquor case and the name of the Hajipur railway station Late Ram Vilas Paswan There were talks about keeping it in the name of ji and a memorandum was given to him,” Paras said in a tweet.
Meanwhile, the Supreme Court on Tuesday agreed to hear a petition on January 9 seeking an independent and SIT probe in Chhapra, Bihar hooch tragedy that has claimed over 40 lives so far.
The plea was mentioned on Tuesday before a bench headed by Chief Justice DY Chandrachud for an early hearing and it agreed to hear the case next Monday.
The plea was filed by Aryavarta Mahasabha Foundation through advocate Pawan Prakash Pathak, seeking formulation of national action plan to curb the manufacturing, trading and sale of illicit liquor.
Earlier on Saturday, the Delhi Police Crime Branch claimed to have arrested one of the key accused in the Chhapra spurious liquor case which took over 70 lives earlier this month.
The accused, identified as Ram Babu Mahto was arrested from the Dwarka area, the police said, adding, that he was previously involved in seven other cases.
According to special Commissioner of Police (CP) Crime Branch Ravinder Yadav, “Information was received and developed by the Inter-State Cell, Crime Branch, Chankyapuri, Delhi that one Ram Babu Mahto wanted in the case related to spurious liquor tragedy in Bihar, may be hiding somewhere in Delhi”.
“On the basis of technical surveillance as well as specific inputs, the accused Ram Babu Mahto from Bihar’s Doila, was arrested from the area of Dwarka in Delhi,” Yadav said.
“Appropriate legal action is being taken and information about the arrest of the accused has been shared with Bihar Police for further action,” CP Yadav added.
Yadav added that Bihar Police was contacted and it was established that accused Ram Babu Mahto is one of the most wanted in 2022 case under the Bihar Excise Act- 2016 registered at Police Station Mashrak, District Saran in Bihar.
“Ram Babu Mahto was one of the key players in the entire episode where several people lost their lives. When Bihar Police were searching for him, he fled from Bihar,” Yadav added.
Police said Ram Babu belongs to a farming family and has four brothers and two sisters. He is a Class 8 dropout.
“Ram Babu claimed that his family is in bad financial condition. However, owing to the prohibition of liquor in the state of Bihar, he sensed an opportunity to make quick and easy money and indulged in manufacturing and selling spurious Liquor,” Yadav said.
As per the information available so far, he is involved in several cases of the illicit liquor business, the police said.