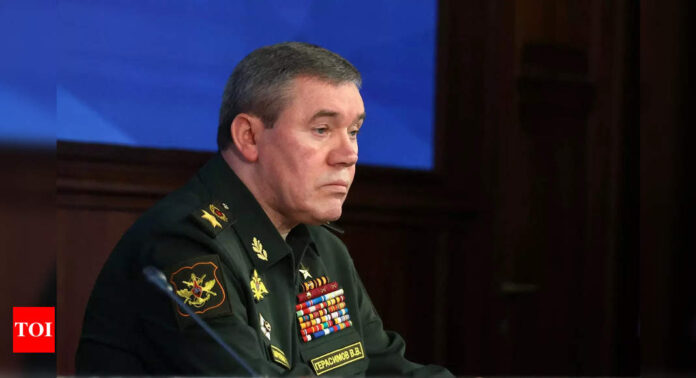 KYIV/NEAR BAKHMUT: Moscow named a new commander for its invasion of Ukraine while Russian private military firm Wagner Group said its capture of the salt mining town Soledar in eastern Ukraine was complete.
Russian defence minister Sergei Shoigu on Wednesday appointed chief of the general staff Valery Gerasimov as overall commander for what Moscow calls its “special military operation” in Ukraine, now in its 11th month.
The change effectively demoted general Sergei Surovikin, who was appointed only in October to lead the invasion and oversaw heavy attacks on Ukraine’s energy infrastructure.
Meanwhile, Yevgeny Prigozhin, head of Wagner and a close ally of Russian President Vladimir Putin, said his forces had captured all of Soledar and killed about 500 Ukrainian soldiers after heavy fighting.
“I want to confirm the complete liberation and cleansing of the territory of Soledar,” Prigozhin said in a statement.
“The whole city is littered with the corpses of Ukrainian soldiers,” said Prigozhin.
US defence secretary Lloyd Austin told reporters on Wednesday that he could not corroborate reports that Soledar was in Russian hands.
Reuters was unable to independently verify the situation in Soledar.
Ukrainian President Volodymyr Zelenskyy mocked previous Wagner claims to have seized part of Soledar but made no immediate comment on the latest assertions.
“The terrorist state and its propagandists are trying to pretend that part of our town of Soledar … is some sort of a Russian possession,” Zelenskyy said in a video address. “But fighting continues.”
In a statement on Facebook, the Ukrainian military general staff said Russian forces were suffering heavy losses as they tried to take Soledar and sever Ukrainian supply lines.
Russia has struggled to cement control over the town, which would be Russia’s most substantial gain since August after a series of retreats before Ukrainian counter-offensives in the east and south.
A Russian defence ministry statement said the command reshuffle was meant to improve contacts between military branches and the effectiveness of the command structure.
One prominent military blogger who posts on the Telegram messaging app under the name of Rybar said Surovikin was being made the fall guy for recent Russian military debacles. Those included a Ukrainian attack on a Russian barracks that killed at least 89 Russian soldiers over New Year’s.
Surovikin was ordered to head the campaign after Ukrainian offensives turned the tide of the war and drew attention to poor training, equipment and morale among Russian forces.
If pro-Russian forces succeed in taking Soledar, it would be a stepping stone in Moscow’s thrust to capture Ukraine’s eastern Donbas industrial region. The town would be a base to attack the nearby city of Bakhmut, which has held out for months and is a supply line hub in eastern Ukraine.
Before Wagner’s latest statement, the Kremlin stopped short of claiming victory and acknowledged heavy casualties.
“Let’s not rush, let’s wait for official statements. There is a positive dynamic in progress,” Kremlin spokesman Dmitry Peskov said.
A Reuters photographer who reached the outskirts of Soledar in recent days said many residents had fled the town in perishing cold. Smoke could be seen rising over the town and the incoming artillery fire was relentless, she said.

India News Shukla ji - February 3, 2023 0
BIHARSHARIF: The odds were 500 to one when a shy but eager 17-year-old walked in to tackle the mathematics paper on Day...
© Mumbai Highlights Theme by Webclickk
MORE STORIES