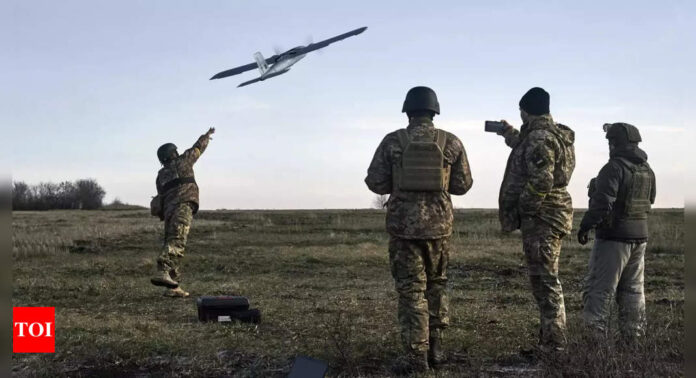 KYIV: Russia is preparing to step up its attacks on Ukraine using Iranian-made exploding drones, according to Ukrainian President Volodymyr Zelenskyy, as Moscow looks for ways to keep up the pressure on Kyiv after months of battlefield setbacks for the Kremlin‘s war strategy.
“We have information that Russia is planning a prolonged attack by Shaheds (exploding drones),” Zelenskyy said in his nightly video address late Monday.
He said the goal is to break Ukraine’s resistance by “exhausting our people, (our) air defense, our energy,” more than 10 months after Russia invaded its neighbor.
Russian President Vladimir Putin is exploring how to shore up confidence in Moscow’s flawed war effort, which in recent months has been dented by a Ukrainian counteroffensive backed by Western-supplied weapons. That has brought criticism in some Russian circles of the military’s performance.
In the latest embarrassment for the Kremlin, Ukrainian forces fired rockets at a facility in the eastern Donetsk region where Russian soldiers were stationed, killing 63 of them. It was one of the deadliest attacks on the Kremlin’s forces since the war began more than 10 months ago.
Ukraine’s Western-reinforced air defenses have made it difficult for Russian warplanes to carry out missile strikes. The Iranian-made exploding drones are a cheap weapon which also spreads fear among troops and civilians. The United States and its allies have sparred with Iran over Tehran’s role in allegedly supplying Moscow with the drones.
The Institute for the Study of War said that Putin is looking to strengthen support for his strategy among key voices in Russia.
“Russia’s air and missile campaign against Ukraine is likely not generating the Kremlin’s desired information effects among Russia’s nationalists,” the think tank said late Monday.
“Such profound military failures will continue to complicate Putin’s efforts to appease the Russian pro-war community and retain the dominant narrative in the domestic information space,” it added.
Zelenskyy warned that in the coming weeks, “the nights may be quite restless.”
He added that during the first two days of the new year, which were marked by relentless nighttime drone attacks on Ukrainian cities and energy infrastructure, the country’s forces shot down more than 80 Iranian-made drones.
As well as hoping to wear down resistance to Russia’s invasion, the long-range bombardments have targeted the power grid to leave civilians at the mercy of biting winter weather as power outages ripple across the country.
“Every downed drone, every downed missile, every day with electricity for our people and minimal shutdown schedules are exactly such victories,” Zelenskyy said.
In the latest fighting, a Russian missile strike overnight on the city of Druzhkivka in the partially occupied eastern Donetsk region wounded two people, the deputy head of Ukraine’s presidential office, Kyrylo Tymoshenko, reported Tuesday.
Officials said the attack ruined an ice hockey arena described as the largest hockey and figure skating school in Ukraine.
Overnight Russian shelling was also reported in the northeastern Kharkiv region and the southeastern Dnipropetrovsk region.
In the recently retaken areas of the southern Kherson region, Russian shelling on Monday killed two people and wounded nine others, Kherson’s Ukrainian governor, Yaroslav Yanushevich, said Tuesday. He said the Russian forces fired at the city of Kherson 32 times on Monday.