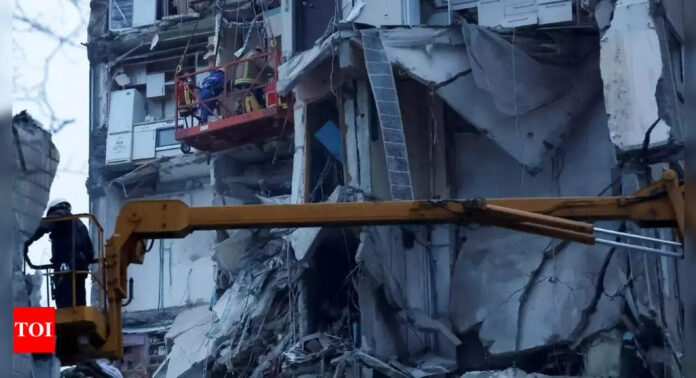 KYIV: Ukraine said Tuesday 22 people were still missing after a Russian missile struck an apartment block in the city of Dnipro, killing at least 44 people.
Saturday’s strike was one of the deadliest attacks since Russia invaded Ukraine nearly 11 months ago. The Kremlin denies that its forces were responsible.
“Twenty-two people are currently being sought,” the state emergency services said.
Dnipro’s mayor Borys Filatov gave the new toll from the attack which ripped open the side of the Soviet-designed housing block in the central city.
The presidency said earlier that one of the bodies recovered from the rubble Tuesday was that of a child. Officials have said five children were among the dead.
The Ukrainian army said the block was hit by an X-22 Russian missile.
Emergency services said municipal workers had removed more than 9,000 tonnes of construction debris and 41 damaged cars since the rescue work began on Saturday.
The attack also triggered the resignation of a Ukrainian official who had sparked an outcry by suggesting air defence could have been responsible by intercepting a Russian missile, which then fell on the building.
“I want to show an example of civilised behaviour: a fundamental mistake, then resign,” presidential advisor Oleksiy Arestovych wrote on social media, posting a picture of his handwritten letter.
Although the toll from the Dnipro attack is the highest of any recent single shelling, Ukraine said Tuesday that fighting was continuing across the frontline.
The deputy head of Ukraine’s presidential office, Kyrylo Tymoshenko, said two people had been killed in the southern regions of Mykolaiv and Kherson by Russian shelling.
He said two civilians were killed in the Donetsk region, which has been the epicentre of fighting in recent months.
A Ukrainian military spokesman said again Tuesday that fighting was ongoing for Soledar, a small salt mining town in Donetsk that Russia claims to have fully captured.
“The Ukrainian military is in Soledar and is repulsing the Russian army,” the spokesman for forces in east Ukraine, Sergiy Cherevaty, said.