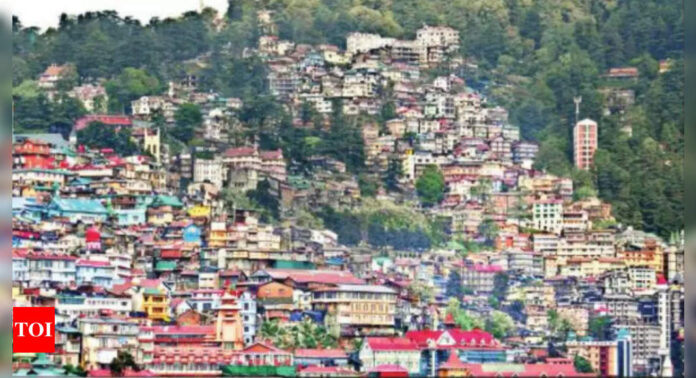 The tragedy of a town slowly sinking under its own weight tells many tales. There are stories of pain and loss, of people living each day in dread of losing their homes and those who have overnight turned into refugees in their own town. There’s also a larger and scarier question lurking in the events of land-subsidence unfolding at Garhwal’s Joshimath town – are there other Joshimaths-in-the-making across India’s troubled hillscapes?
Indeed, many experts believe this bustling settlement on the slopes of the upper Alaknanda valleyrepresents a microcosm of much that’s going wrong across the Himalayas.
Take the issue of unplanned, slapdash growth. For centuries, Joshimath was a small hamlet on the Tibet trade route and a gateway to Badrinath, with an ancient shrine and a monastery of its own. Growing up in the town in the 1960s, geologist Pradeep Pandey, who retired as regional director at the minerals directorate of India’s Department of Atomic Energy, remembers living in a house with a corrugated roof. “And ours was a government accommodation. There were hardly any concrete structures in the town back then,” says Pandey.
Like many Himalayan towns, Joshimath has seen a huge construction boom in the past few decades, with multistorey buildings coming up on fragile slopes. “Joshimath sits on the debris of a landslide. A major flood in the Alaknanda in 1970 destabilised the slopes in the region. Thereafter, the town began to report incidents of land subsidence, indicating that it was reaching the threshold of its carrying capacity. This led to the M C Mishra committee being set up which submitted a report in 1976 recommending severe curbs on building activities. Instead, what followed was exponential growth with army and ITBP establishments coming up, private hotels mushrooming and people from surrounding villages settling there,” says geologist S P Sati of Veer Chandra Singh Garhwali Uttarakhand University.
While these buildings choked the natural drainage of the area, no system for the flow of waste was put in place, says Sati. To top it all, most houses have soak pits thathave pushed down loose material into the ground, increasing the risk of land sinking, adds Pandey.

A construction boom with scant regulations, often under the pressure of burgeoning tourism, finds echo across the Himalayan region. “After the events in Joshimath we are getting numerous letters saying the same thing is happening in Shimla, in Nainital and elsewhere. Building bylaws need to be enforced,” says environmentalist Sunita Narain, director general of the Centre for Science and Environment.
“In the Himalayas, there was always a tradition of building notso much with concrete. Now, people want to use concrete and that’s fine. Aspirations change. But shouldn’t these be done under regulations? Why aren’t institutions such as Roorkee University being asked to come up with the appropriate building solution for the Himalayas? We build without any consideration that we are dealing with an ecosystem that is different from Greater Kailash (a Delhi neighbourhood),” says Narain.
Then there are big infrastructure and power projects. Three major construction projects were underway around Joshimath –NTPC’s Tapovan-Vishnugad hydroelectric project on the Dhauliganga River; the Helang-Marwari bypass of BRO that will reduce the distance to Badrinath by 30km and where conventional use of explosives was being done, and the Char Dham road-widening project. “Vibrations caused during tunnelling and road-making could have affected the glacial drift deposits on which the town is built, but this needs a thorough investigation to dispel doubts,” says Pandey.
As many as 650 hydro projects are planned or underway in highaltitude locations across the Himalayan and Hindukush region, many close to glaciers or glacial lakes and seismically active zones. Several planned projects, such as the 315mhigh rock-filled Pancheshwar dam close to the Uttarakhand-Nepal border, the Dibang multipurpose project, to be the world’s tallest concrete gravity dam at 288m in Arunachal, and the 3,097MW Etalin hydroelectric project, also in Arunachal, have sparked concerns over damage to ecology and the threat of natural disasters.
While hydel projects are important for meeting the country’s energy needs, there’s a feeling that the Himalayas are being milked. “We’ve always had a view that the mountains should be treated differently. Yet, in practice, we do things without the consideration that the Himalayas are the world’s youngest, most fragile mountain range. I have been on a committee in 2013 that examined the number of hydropower projects to be permitted in the Himalayas. The plan that theengineers presented was completely mindless: 9,000MW of power projects to come back-to-back, where the engineers themselves agreed that it would affect the flow of the river by 70% to 80%. Most of these projects were ultimately passed,” says Narain.
And, there’s climate change looming large over the mountains. Of all Indian regions, the Himalayas are witnessing the fastest temperature rise and increased frequency of extreme weather events. Just two years ago, areas close to Joshimath – Reni village as well asthe Rishiganga and Tapovan-Vishnugad projects – were ravaged by flash floods triggered by a massive glacier fall, killing over 200 people.
“Apart from all the other havoc it wreaked, the 2013 deluge also completely or partially damaged 24 hydel projects,” says Shekhar Pathak, historian and founder of the NGO, PAHAR. “Climate change is adding to our susceptibility. We need to build more resilience, not add to our fragility, to meet the challenge of extreme weather. ”