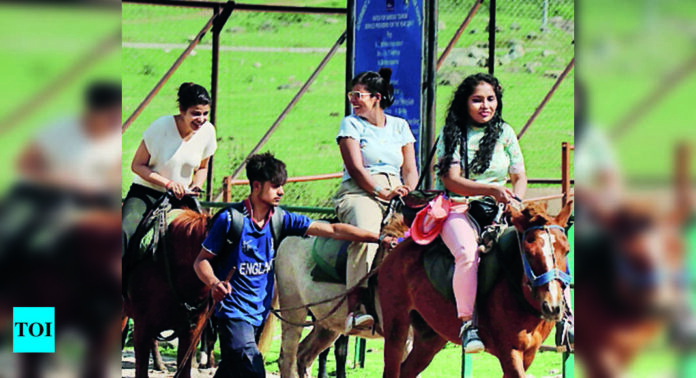 NEW DELHI: The home ministry on Tuesday, quoting from home minister Amit Shah’s speeches and statements made in 2022, said there was now complete control of the security forces on terrorism in J&K, which has transformed from a “terrorist hotspot” to a “tourist hotspot”.
While the home ministry’s ‘year end review 2022’ document claims that 22 lakh tourists had visited Kashmir till October 5, 2022, J&K government sources told TOI that the tourist arrivals in the Valley had risen further to over 25 lakh by November 24, 2022. “This has g iven employment to thousands of youths,” the MHA said. According to the MHA report card, the number of terror incidents in J&K fell by 45% to 229 in 2021 from 417 in 2018 and the number of security forces martyred by 54% to 42 from 91 over the same period.

“Now there are no incidents of stone p elting in Jammu & Kashmir as the government under the leadership of PM Narendra Modi is moving ahead of the path of development with firmness,” the MHA said, drawing from Shah’s statement during the inauguration of 263 develo pment projects worth Rs 1,960 crore in Jammu region on October 4 lastyear. “In Jammu and Kashmir, 42,000 people succumbed to terrorism and in Delhi no one flinched an eyelid, but now under the leadership of PM Modi, there is complete control of the security forces on terrorism,” added the home ministry document.
The ministry reiterated that ‘jamhooriyat’ (democracy) in Kashmir was only for “three families, 87 MLAs and six MPs” earlier, but now 30,000 people had been linked to it by “taking democracy to the village panches, sarpanches, BDC membe rs and zilla panchayats”.
It added that while only Rs 15,000 crore investment had come to J&K over 70 years under the previous regimes, the policy interventions by Modi gov ernment had attracted investment of nearly Rs 56,000 crore in the past three years.
Shah, while appreciating the efforts of security agencies and the administration of J&K for keeping streets free from violence and r estoring the rule of law, however stressed on the need to dismantle the entire terror ecosystem while a ddressing a recent review meeting on J&K, said the MHA.
On the no rtheast front, the MHA said many disputes including land boundary row with Bangladesh, Bru-Reang issue, Bodo issue etc had been resolved through agreements. Also, thousands of militants in the region had surrendered their weapons and joined the mainstream of society and were now engaged in development of the country. Many areas in northeastern states of Nagaland, Assam and Manip ur were taken out from the list of “disturbed areas” after decades under the Armed Forces (Special Powers) Act, the ministry added.
Even Left-wing violence declined by 77% from all-time high of 2,258 i ncidents in 2009 to 509 incidents in 2021. Resultant deaths of civilians and security personnel fell by 85% to 147 in 2021 from an alltime high of 1,005 in 2010, as per the MHA report card.