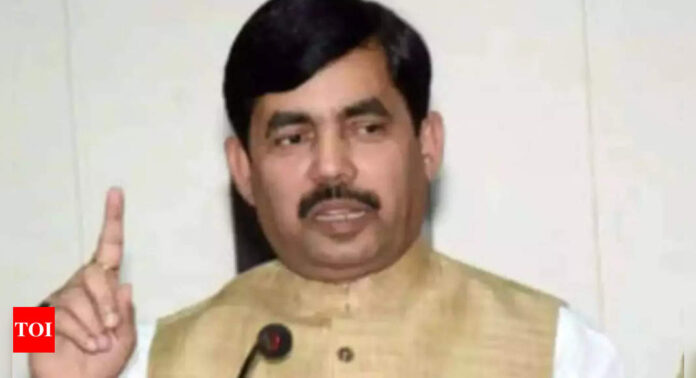 NEW DELHI: The Supreme Court on Monday dismissed a plea by BJP leader and former union minister Syed Shahnawaz Hussain challenging the Delhi High Court order for registration of an FIR against him on a woman’s complaint alleging rape.
“Let’s there be a fair investigation and, if there is nothing, it will exonerate you,” a bench of Justices S Ravindra Bhat and Dipankar Datta told the counsel appearing for Hussain.
Senior advocates Mukul Rohatgi and Siddharth Luthra, appearing for Hussain, told the bench that complaints after complaints were filed by the complainant woman against the politician.
“There are complaints after complaints which were investigated by the police and nothing was found. It cannot go on and on,” Rohatgi argued, adding there was a “series of consistent attacks” against Hussain.
However, the bench observed, “We find no reason to interfere.”
The high court had on August 17 last year dismissed Hussain’s plea challenging a trial court order directing the Delhi Police to register an FIR against him, saying there was no perversity in the 2018 order.
The top court had on August 22, 2022 stayed the operation of the high court order.
During the earlier hearing in the matter before the apex court, Hussain’s counsel had argued that the complaint was “bogus” and “malicious”.
In 2018, a Delhi-based woman had approached a lower court seeking registration of an FIR against Hussain for alleged rape, which the BJP leader has denied.
A magisterial court had on July 7, 2018 ordered registration of an FIR against Hussain, saying a cognisable offence was made out in the complaint.
This was challenged by the BJP leader before a sessions court which had dismissed his plea.
In its order on Hussain’s appeal, the high court had said, “There is no merit in the present petition. The petition is dismissed. The interim orders (for stay on action against Husssain) stand vacated. The FIR be registered forthwith. The investigations will be completed and a detailed report under Section 173 CrPC be submitted before the learned MM (metropolitan magistrate) within three months.”
The high court had also noted that while reference was made in the police’s status report to the recording of the statement of the prosecutrix on four occasions, there was no explanation as to why the FIR was not lodged.
“The FIR only puts the machinery into operation. It is a foundation for the investigation of the offence complained of. It is only after investigations that the police can come to the conclusion whether or not an offence had been committed and if so by whom. In the present case, there seems to be a complete reluctance on the part of the police to even register an FIR,” the high court had said.