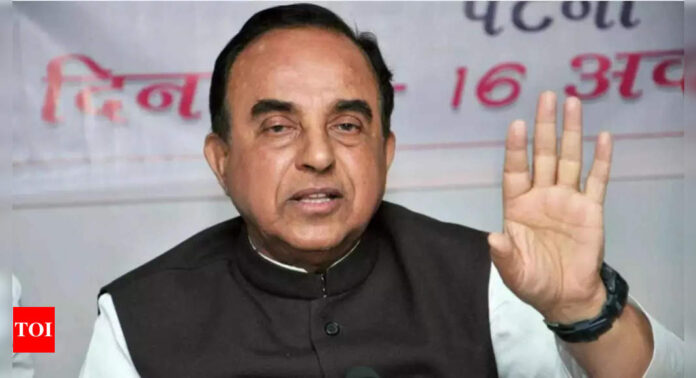 NEW DELHI: BJP leader Subramanian Swamy on Friday withdrew from the Supreme Court his 2013 plea seeking quashing of an alliance between Jet Airways and the Abu Dhabi-based Etihad Airways.
“I wish to withdraw this, it is the Jet-Etihad matter. Now there is no Jet, no Etihad,” Swamy told a bench of Justices MR Shah and CT Ravikumar.
The bench then remarked in a lighter vein, “We do not know who is responsible for that.”
Taking note of his submissions, the top court allowed Swamy to withdraw his plea.
“The petitioner seeks permission to withdraw in view of subsequent developments. The petitioner stands dismissed as withdrawn,” the bench said while granting him liberty to file a fresh application, if there is any new cause of action.
The apex court had issued notices to the Centre, ministry of commerce, the ministry of external affairs, Foreign Investment Promotion Board (FIPB), Department of Industrial Policy and Promotion, Directorate General of Civil Aviation and others in the case.
Swamy had submitted that the deal was against public interest as there has been squandering of natural resource i.e. the sky and air space.
He claimed that the deal was cleared against the advice of the Parliament Select Committee and other advisory bodies.
Swamy had also submitted that even the CAG has found that there has been reckless allocation of air space to foreign airlines.
Jet Airways had on April 24, 2013 announced plans to sell 24 per cent equity to Etihad Airways for about Rs 2,058 crore as part of a strategic alliance that would lead to a major expansion in their global network.
Swamy had in his PIL sought “a direction to set aside and revoke any action or decision or grant of any further approvals/permissions/permits, etc. by the respondent(govt) authorities, based upon, relying upon or in furtherance of the impugned bilateral dated April 24.”
“The petitioner challenges such arbitrary, irrational and malafide act of grant of largesse in the form of bilateral/MoU dated April 24 and by way of the present petition seeks an investigation under the supervision of this Court into the matters of national and public interest,” he had said in his petition.
He had also sought a CBI probe against government officials who had cleared the deal.
Swamy had questioned the Centre’s decision to execute the agreement in favour of Abu Dhabi under the existing air service agreement between the governments of India and United Arab Emirates.
“The actions of authorities from execution of the bilateral to the unprecedented haste in order to assist the realisation of wrongful gains by the facilitator are writ large with acts of collusion and abuse of position,” the petition had contended.