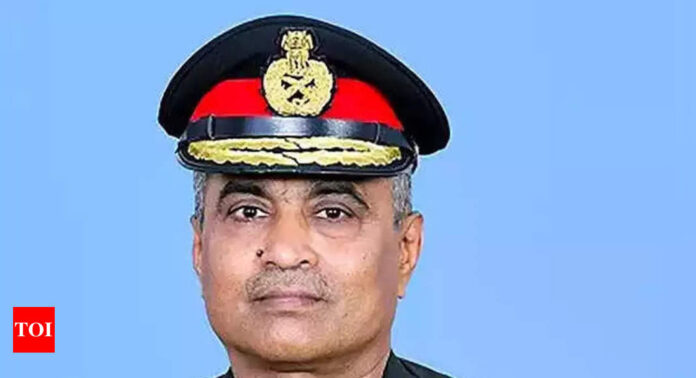 BENGALURU: Close on the heels of him conceding that China has “slightly increased” troops along the Line of Actual Control (LAC), Army chief General Manoj Pande on Sunday said the situation along the northern border remains “normal” and necessary steps are being initiated through existing protocols and mechanisms to ensure peace.
On January 12, Pande had said that the overall security situation along the 3,488-km long LAC was “stable, and under control, but unpredictable”. On Sunday, speaking after reviewing the 75th Army Day Parade in Bengaluru, he said: “While maintaining a strong defence posture along the LAC, we’re ready to tackle any contingency,” adding that a concerted effort with other agencies and local administration has ensured considerable development of infrastructure.
Infiltration & Smuggling Thru Drones
“On the Western front, ceasefire continues along the Line of Control (LOC) and instances of violations have drastically reduced. But terrorist infrastructure continues to exist across the border and our counter-infiltration grid has been consistently preventing infiltration bids. Along the international boundary sector — Jammu and Punjab — drones are being used to smuggle drugs and arms. We’ve employed counter-drone jammers, spoofers and other technology to prevent this,” he said.
Claiming that people have rejected violence in the hinterlands of Jammu & Kashmir, Pande said there was a significant decrease in violence because of the proactive measures. “But proxy terrorist units are indulging in targeted killings to gain visibility,” he said.
The security situation in the northeastern sector has improved and the Indian Army has played a vital role in reducing violence and convincing insurgents to quit violence, he said, adding that this has resulted in the process of development being expedited.
Cyber, Space & Modernisation
Arguing that the Russia-Ukraine conflict has underlined benefits of disruptive dual-use technologies, he said: “Information warfare, cyber and space wars are emerging as domains and grey-zone warfare has reiterated that non-kinetic warfare will be as critical as kinetic warfare.” As a result, battlefronts are becoming more complicated, confrontational and lethal.
The Army is being transformed to boost operational preparedness, and as an effort towards force structuring and optimisation, battle squads will be converted into integrated battle groups, old establishments and units will be disbanded, or revamped.
“…To make the teeth-to-tail ratio effective, with modernisation and technological infusion, the Army will be right-sized. Our aim is to move from a manpower-intensive to a technologically-driven Army,” he added.
“Provision of modern weapons and equipment is an integral part of this effort, for which the Indian Army is determined to find indigenous solutions. ‘Modernity through self-reliance’ will be our mantra. The Indian defence industry is coming forward to meet this challenge in an efficient manner. The Indian Army is moving from a buyer-seller relationship with the industry to ‘partnership’.
Agnipath & Int’l Co-operation
He said that the training of the first batch of male Agniveer has begun and that simulators and modern training aids are being used to make it efficient. Training of women Agniveers will start in March.
Stating that the Army was fully committed to the ‘Nari Shakti’ initiative, he said: “Today, women officers and soldiers are serving in all operational theatres, including Siachen Glacier. The Army is not only fully committed to achieve better jointness and integration with the other two services, but will always be ahead,” he said.
As part of its international co-operation, the Army has more than 3,300 vacancies at its institutions for officers and soldiers of friendly countries and 11 Indian military training teams are strengthening relations with allied countries while more than 5,700 Indian soldiers are deployed in eight UN peace-keeping missions.