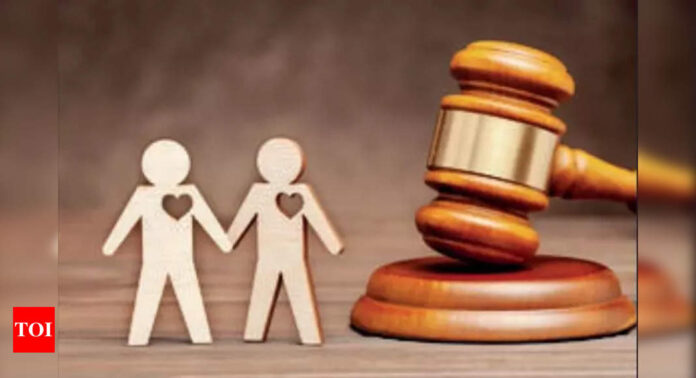 NEW DELHI: Deciding against meandering of an important socio-religious issue — pleas for legalising same-sex marriages — in the high courts, the Supreme Court on Friday transferred to itself all petitions with similar pleas from the HCs for a consolidated scrutiny and omnibus ruling.
A bench of Chief Justice D Y Chandrchud, and Justices P S Narasimha and J B Pardiwala ordered shifting of nine similar petitions pending before the Delhi HC and one before the Kerala HC to the SC even as solicitor general Tushar Mehta suggested an additional option of the Delhi HC scrutinising the issue to benefit the SC with its view.

There was a crowd of senior advocates — N K Kaul, Mukul Rohatgi, Anand Grover, Menaka Guruswamy, Saurav Kirpal — along with other advocates who sought early hearing of the petitions, six of which are already pending before the apex court. So, together, there would now be 16 petitions which would have to be scrutinised by the SC.
While fixing March 13 for hearing, the CJI nominated advocate Kanu Agrawal from the government side, and Arundhati Katju from the petitioners’ side to prepare a common compilation of case laws for citing during arguments.

The SC also asked petitioners to prepare distinct issues requiring adjudication. The initial thrust, when the court entertained the petitions on November 25 and issued notice to the Centre while enlisting assistance from the attorney general, was amendment to the Special Marriage Act to enable two persons, irrespective of gender, to get married.
However, as the cases are getting transferred from the HCs to the SC, the ambit of adjudication by the apex court will get enlarged to examining allowing same-sex marriage registration under Hindu Marriage Act and Foreign Marriage Act, in addition to that under Special Marriage Act.
The SC in its 2018 judgment in Navtej Singh Johar case had said members of the LGBTQ community can’t be prosecuted or persecuted under Section 377 of IPC as they have a right to individual sexual orientation, which amounted to decriminalising gay sexual relationships in private between consenting adults.
The SC had also ruled that “members of the LGBT community are entitled… to full range of constitutional rights, including the liberties protected by the Constitution… The choice of whom to partner, the ability to find fulfilment in sexual intimacies and the right not to be subjected to discriminatory behaviour as intrinsic to constitutional protection of sexual orientation. Members of LGBTQ are entitled to the benefit of an equal citizenship, without discrimination, and to equal protection of law.” The petitioners argued that non-recognition of same sex marriage is an act of discrimination that strikes at the root of dignity and self-fulfilment of the LGBTQ+ couples. “Structural changes as well as attitudinal changes are essential for the members of the LGBTQ+ community and for their families. Equality is not achieved with the discrimination of homosexuality alone but must extend to all spheres of life, including the home, workplace and public places,” they said.