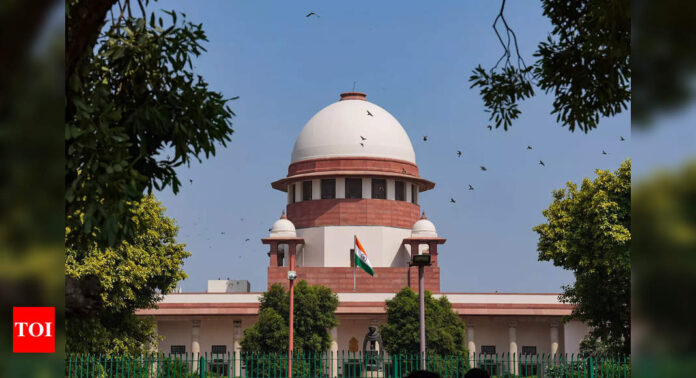 NEW DELHI: Observing that the OBC community should not go unrepresented in local bodies, the Supreme Court on Wednesday granted time till March 31 to the Uttar Pradesh government to fulfil the ‘triple test’ criteria fixed by it for the quota and stayed the Allahabad high court order which had directed that elections for urban local bodies be held “immediately” without OBC reservation.
As the tenure of several local bodies has expired or is about to expire by the end of this month, a bench of Chief Justice DY Chandrachud and Justice PS Narasimha allowed their functions to be discharged by a three-member body headed by the district magistrate as directed by the high court but restrained the committee from taking any major decision.

As per the apex court’s ruling, the state cannot extend reservation to OBCs without fulfilling the triple test: (1) To set up a dedicated commission to conduct contemporaneous rigorous empirical inquiry into the nature and implications of the backwardness qua local bodies; (2) To specify the proportion of reservation required to be provisioned local body-wise in light of the recommendations of the commission; (3) Such reservation shall not exceed an aggregate of 50% of the total seats reserved in favour of SCs/STs/OBCs taken together.
Challenging the HC order, solicitor general Tushar Mehta contended that the state government had already issued notification for setting up the dedicated commission which has been granted six months’ time to conduct the empirical inquiry and file a report with its recommendations on OBC reservation.

As the court said that there should not be vacuum for a long period as the terms of many bodies have already expired, the solicitor general submitted that the commission could be asked to wrap up its proceedings within three months.
“The direction of the high court, which mandates the holding of elections to local bodies in Uttar Pradesh without reserving seats for Backward Classes of citizens will result in a violation of the constitutional and statutory requirements of reservation for the OBCs. Democratisation of municipalities under Article 243T and the duty to provide representation are not at competing values. Prima facie, the high court is not correct in prioritising one over the other and directing the holding of elections without the provision of representation for the Backward Classes,” the court said.

BJP wants votes of backward classes, but doesn’t want to share power with them: Akhilesh Yadav

“Democratising the municipalities and true representation in the composition of the municipalities under Article 243T are both constitutional mandates. When a constitutional court is called upon to review the decisions of the State in this context, it must ensure that both these values are given full effect so that truly representative and vibrant local bodies contemplated under Part IXA of the Constitution are realised,” it said.
The bench, thereafter, passed an interim order and asked the state government to complete the exercise by March 31 and stayed a part of the HC order in which it had directed that polls be conducted immediately without OBC quota.
“It is further directed that until the triple test/conditions as mandated by the Supreme Court in K. Krishna Murthy (supra) and Vikas Kishanrao Gawali (supra) is completed in all respects by the state government, no reservation for Backward Classes of citizens shall be provided. Since the terms of municipalities has either ended or shall be coming to an end by January 31, 2023, and the process of completion of triple test/conditions being arduous, is likely to take considerable time, it is directed that the state government/state election commission shall notify the elections immediately. While notifying the elections, the seats and offices of chairpersons, except those to be reserved for Scheduled Castes and Scheduled Tribes, shall be notified as for general/open category,” the HC had said.
The apex court in its various verdicts emphasised that the ‘triple test’ criteria is a must for granting reservation. It had in 2021 upheld the validity of the Maharashtra law to reserve seats for backward classes in local bodies but said that it could not be implemented till the government meets the triple conditions fixed.