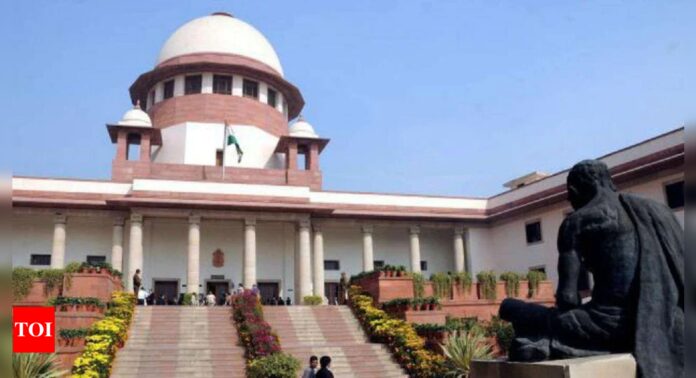 NEW DELHI: Amid the ongoing tussle between the government and the Supreme Court, each holding the other responsible for delay in appointment of judges of high courts, the Union law ministry has told the parliamentary standing committee on law and justice that 30% of names recommended by HC collegiums are rejected by the SC collegium, reports Pradeep Thakur.
In a detailed submission, the law ministry said: “In 2021, 251 recommendations were made by various HC collegiums. As on May 26, 2022…148 appointments (of judges) have been made in the various HCs and 74 names were not recommended by the SC collegium and accordingly remitted to HCs concerned.”
Law min: Onus of filling HC posts on HC collegium
The remaining 29 proposals were at various stages of processing between the government and the SC collegium. “This amounts to 30% rejection at the level of Supreme Court collegium,” the law ministry has told the parliamentary standing committee on law and justice.
The existing collegium system provides that the chief justice of a HC is required to initiate a proposal for filling up vacancies of a judge in the HC six months prior to the occurrence of a vacancy. “The government appoints only those persons as judges of HCs who are (finally) recommended by the SC collegium. The primary onus of filling up vacancies in the HC lies with the HC collegium,” the law ministry submitted.
Sources in the law ministry said the other reason for huge vacancies in HCs is the lack of recommendations received from HC collegiums. TOI had in its December 2 edition reported that HC collegiums had not suggested names for 55% of judges’ vacancies.
As of November 25, 2022, there were 331 vacancies in 24 HCs and the collegiums of these HCs had till then initiated recommendations against only 148 vacancies. For the remaining 183 posts of judges, which were lying vacant for as many as one to five years, no recommendations were received, sources had said.
Taking note of the perpetual delay in following timelines in appointment of judges, the parliamentary panel, headed by BJP member Sushil Kumar Modi, has recommended that both the government and the higher judiciary must draw “a proactive timeline and scrupulously adhere to it”.
“The Committee observes that the judicial system of the country is plagued with perennial problems of vacancy and pendency, especially at the high court’s level and there is no end in sight for these problems. Both the problems are interwoven in a way that vacancies have a natural fallout on pendency of cases. One has to acknowledge that the existing process is not working and it overwhelms us completely, it needs to be re-engineered,” the panel noted.
Government sources, however, said the Centre has been following the timeline prescribed in the existing memorandum of procedure that guides appointment of judges to HCs and SC.