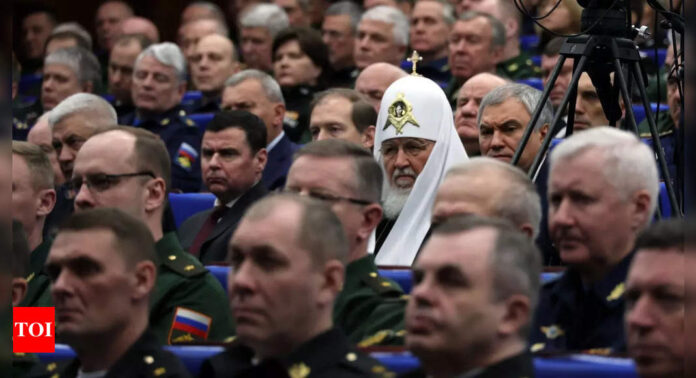 MOSCOW: Russia’s spiritual leader, Patriarch Kirill, on Thursday called for a ceasefire in Ukraine on Orthodox Christmas, celebrated this week by both countries.
The 76-year-old Orthodox leader is a staunch supporter of President Vladimir Putin and his offensive in Ukraine.
He has given his blessing to Russian troops fighting in Ukraine and delivered heavily anti-Western and anti-Kyiv sermons throughout the conflict.
“I, Kirill, Patriarch of Moscow and of all Rus, appeal to all parties involved in the internecine conflict with a call to cease fire and establish a Christmas truce from 12:00 on January 6 to 00:00 on January 7 so that Orthodox people can attend services on Christmas Eve and on the day of the Nativity of Christ,” he said on the church’s official website.
The Russian Orthodox Church has lost considerable influence in Ukraine since Moscow’s annexation of Crimea and fighting in eastern Ukraine in 2014.
In 2019, part of the Ukrainian Orthodox Church broke ties with Moscow — which has had spiritual dominance in much of Ukraine for centuries — in a historic schism.
The Kremlin’s decision to send troops into Ukraine in February 2022 resulted in many clerics who had continued to remain loyal to Kirill turning away from Moscow.
In May, the Moscow-backed branch of Ukraine’s Orthodox Church severed ties with Russia, citing Patriarch Kirill’s lack of condemnation of the fighting.
Patriarch Kirill has been sanctioned by Britain and Canada for his outspoken backing of Putin’s Ukraine offensive.