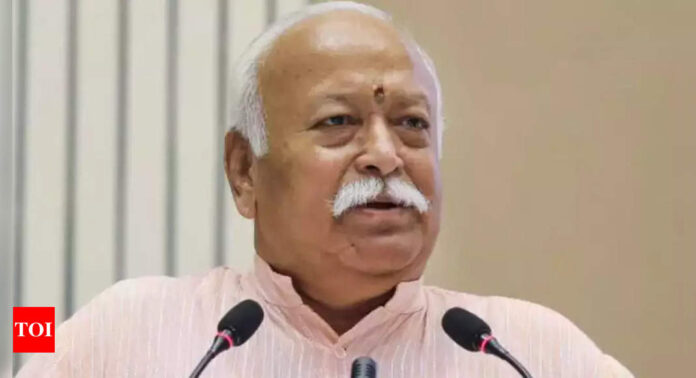 PANAJI: Rashtriya Swayamsevak Sangh (RSS) chief Mohan Bhagwat on Saturday said his organization produces volunteers who can contribute to the country in many fields but does not seek to create any “pressure group” through them. At a public meeting organized by the RSS here, he said one can not understand the Sangh from afar, and appealed people to join the organization as it has the capacity to “take everyone along.”
RSS swayamsevaks (volunteers) are involved in various social causes at their individual level but that does not mean that the Sangh is a “service organisation”, he said. “Whatever Swayamsevaks do, it is in their individual capacity. The Sangh has given them the thought, due to which they work wherever work is needed. They have mastered the art of taking along everyone, that is why they lead society,” Bhagwat said. “This is how volunteers are moulded, they are not moulded to create any influential pressure group in the country. The Sangh wants to unite the whole country,” he added.
Appealing the people to join the Sangh, Bhagwat said people will have misconceptions about the organisation if they watched it from afar. “One cannot understand the sangh looking at it from distance. The sangh has the capacity to take everyone along,” he added. But one should not join the sangh with selfish attitude, he said. “You cannot get anything by joining the sangh, but you can contribute to the country by being a part of it,” he added.
Bhagwat also appealed people to implement environmental values in the day-to-day behaviour.
“If we change our own behaviour towards environment, then society’s behaviour will also change,” he said. The RSS chief also said that it is in the world’s interest that India becomes a strong country. There were various (political and social) experiments in the last 2,000 years but now the world wants India to show the way, he said.