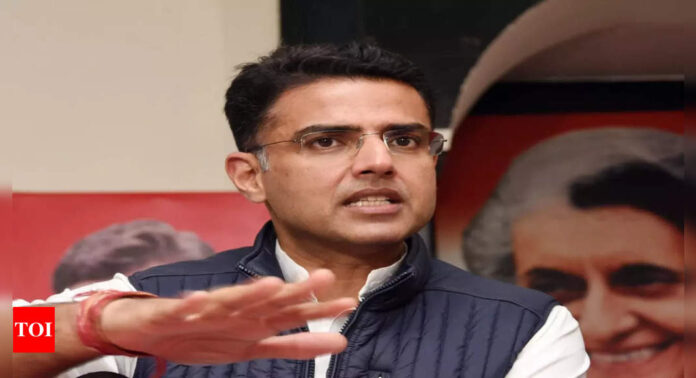 JAIPUR: Indirectly targeting his own party’s government in Rajasthan, Congress leader Sachin Pilot on Monday said the state should take action against the “big sharks” behind the string of recruitment exam paper leaks reported recently.
Addressing farmers and the youth at a Kisan Sammelan in Nagaur’s Parbatsar, the former deputy chief minister also called for a legal guarantee on minimum support price (MSP) for crops.
Pilot, who is involved in a power tussle with Chief Minister Ashok Gehlot, said paper leak incidents hurt the aspirations of the youth who prepare for the exams in adverse conditions while their parents struggle to arrange money for books and fees.
He said in the time to come, petty middlemen and kingpins involved in paper leaks should be caught. “To instill confidence in the youth, the government should take action against the big sharks responsible for paper leaks,” Pilot added without naming anyone.
Meanwhile, addressing a press conference in Jaipur, Food and Civil Supplies Minister Pratap Singh Khachariyawas said, “Sachin Pilot-ji is a former deputy chief minister of our party. Even if Sachin Pilot gives the name of one accused, he will not be spared. Pilot sahab is also our family member.”
“If he has any suggestion, we will take it. Pilot sahab is our senior leader, there is no problem,” he added.
The Rajasthan second grade teacher recruitment exam paper was leaked last month, following which the test was cancelled. More than 50 people, including candidates, were arrested for their alleged involvement.
The Rashtriya Loktantrik Party (RLP), led by Nagaur MP Hanuman Beniwal, will hold a protest in Jaipur on Tuesday against the incidents of paper leaks.
At the Kisan Sammelan, Pilot said, “If farmers and the youth of the country unite, they can defeat any force that divides, spreads rumours, and comes to power by telling lies. We demand the Centre should enact a law to legalise minimum support price,” he said.
“Only two communities — the youth and farmers — can break the politics being done in the name of caste, community, religion, language, province,” Pilot added.
He said the BJP had promised to double the income of farmers, but it attempted to break their backs by enacting three ‘black’ agricultural laws, which had to be withdrawn later. The Congress leader also targeted the Centre over unemployment and inflation.
During his visit to the Jat-dominated Nagaur district, Pilot stopped by the temple of Veer Tejaji in Kharnal.
Assembly elections are going to be held in 11 months, the Congress leader said as he sought the support of farmers and the youth. “The power of a vote in a democracy is known to all,” he added.
Pilot said the Congress struggled for five years during the former BJP government’s rule, and as a result of that, the party got one-sided victory in Nagaur.
State minister Hemaram Chaudhary, Parbatsar MLA Ramniwas Gavadia, Dantaramgarh MLA Virendra Singh Chaudhary and Ladnun MLA Mukesh Bhakar were also present at the Kisan Sammelan.
Earlier, on his way from Jaipur to Parbatsar, Pilot was welcomed by Congress workers at Bagru, Padasoli and Dudu.
The senior Congress leader intends to hold farmer conclaves and meet with people at several places, including Bikaner and Hanumangarh.