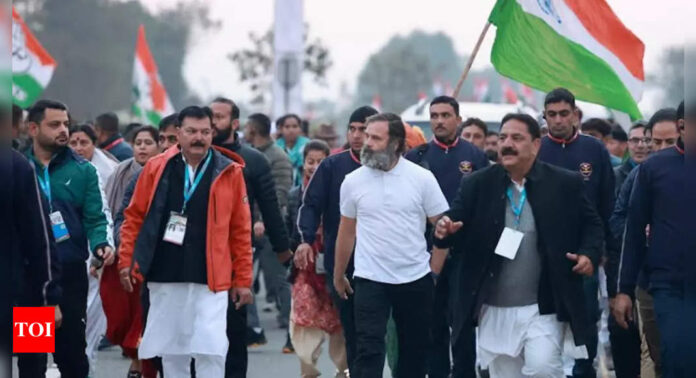 JAMMU: Rahul Gandhi led his Bharat Jodo Yatra from Hiranagar in J&K’s Kathua district Sunday amid tight security in the wake of twin blasts in Jammu a day earlier that left nine injured.
After a day-long halt, the Congress leader set out around 7am from Hiranagar along the Jammu-Pathankot highway, marked by heavy presence of security forces. Officials said the police, CRPF and other agencies were keeping vigil.
Carrying party banners and national flags, hundreds of Congress supporters were seen greeting and waving at Rahul. In a heart-warming gesture, Rahul was seen tying the laces of a girl amid loud cheers. Accompanied by J&K Congress president Vikar Rasool Wani, Rahul was also seen keenly listening to fellow marchers who participated in large numbers.
The yatra is to cover 25-km Sunday, followed by a night halt at Chak Nanak, after which will start from Vijaypur in Samba and reach Jammu city on Monday.
Speaking at Chak Nanak late Sunday, Congress general secretary Jairam Ramesh described Rahul’s security as “topmost priority”. “There will be no compromise on the security of Rahul. We are following the guidelines of security agencies in totality.”
The march had entered J&K from neighbouring Punjab on January 19. Farooq Abdullah of National Conference, Sanjay Raut of Shiv Sena and Param Veer Chakra recipient Bana Singh had received Rahul and walked with him.
The march has a 10-day schedule in its final leg in J&K and is expected to reach Srinagar on January 29-30, culminating with hoisting of the Tricolour at the Congress office in Lal Chowk.