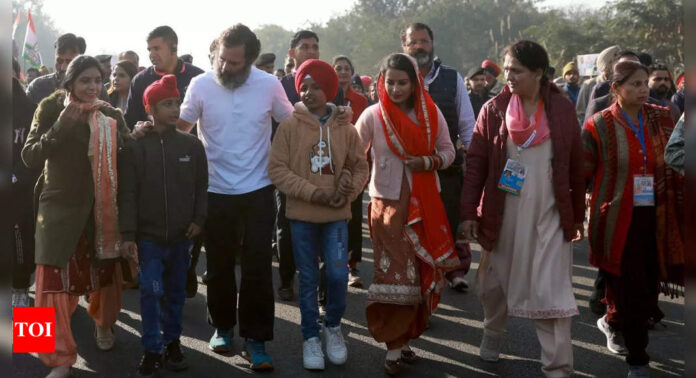 KHUDDA KHURD, HOSHIARPUR: In his public address at the concluding point of the Bharat Jodo Yatra at village Khudda Khurd on Monday evening, Congress leader Rahul Gandhi said that Punjab should be run from Punjab only and not from Delhi. He also asked Punjab chief minister Bhagwant Mann should run the state from here only and not under Arvind Kejriwal’s pressure. In his speech he also referred to the message of the Sikh gurus.
“I want to tell Punjab that every state has its own history, language and way of life. Punjab should be run from Punjab only and not from Delhi. I want to urge Punjab CM Bhagwnat Mann that he should run the state from Punjab only and should not come under pressure from Kejriwal. It’s history of Punjab and is a matter of Punjab’s honour. You should work independently. You should not become remote control of anybody. We always followed this philosophy when Congress made government here. CM of Punjab should run the state,” he said.
He also referred to the farm movement saying when Punjab farmers did not go to their homes for a year, it was their

. “700people lost their lives, they were martyrs and when I said in the parliament that we should pay homage to the 700 martyr farmers with two minute silence, government said that nobody would observe silence and there were no martyrs,” he said.
“Those farmers were demanding fruit of their tapasya . “After two years Prime Minster said that it was a mistake. He did not talk to the farmers for a minute. I can guarantee that had it been UPA government and Dr Manmohan Singh would have been the PM, he would have himself gone to the farmers to speak to them. Congress leaders would have also gone to the farmers,” he said.
Gandhi said that his Yatra was aimed to open ‘shop’ of love in the bazaar of hate. “Guru showed this path. Guru Nanak ji, Guru Gobind Singh ji, Guru Teg Bahadur ji opened the shop of love in the bazaar of hate. In comparison we have done nothing. Our shop if very small and they (Gurus) changed the entire bazaar (with their influence) and showed the path. What they said is happening in this Yatra,” he said adding that Gurus united the people. “Yatra is trying to follow the path shown by the Gurus,” he added.