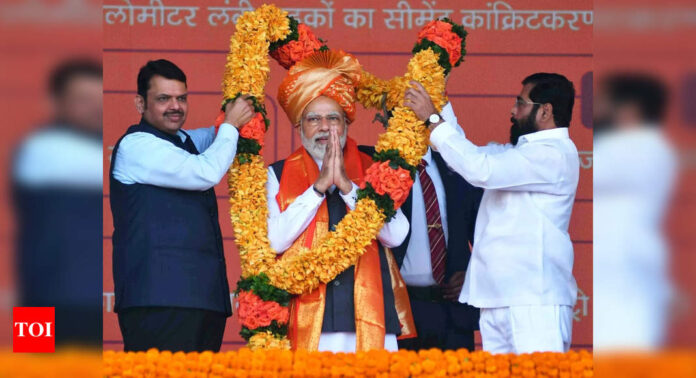 MUMBAI: The city’s civic body, BMC, spent approximately Rs 10 crore on the bhoomi pujan and inauguration of big-ticket projects attended by Prime Minister Narendra Modi on January 19, said civic officials.
Confirming it, additional municipal commissioner P Velrasu said as the events were to be attended by the PM, all arrangements needed to be up to the mark.
“The BMC began preparations well in advance and everything from barricading to lighting and backstage management was coordinated by our team. The BMC spent around Rs 10 crore for it,” said Velrasu.
The PM inaugurated projects worth Rs 38,000 crore on January 19, including a sewage treatment plant pegged to cost the BMC Rs 26,000 crore. Prime Minister Narendra Modi also inaugurated Metro 2A and 7 lines.
The arrangements included chairs for around one lakh people, the stage for the PM, chief minister Eknath Shinde, deputy chief minister Devendra Fadnavis and several MLAs and MPs, a stage for entertainment artistes, publicity material, parking arrangements for those attending the gathering and special seating for street vendors who were brought in on BEST buses for receiving benefits under the PM Street Vendor’s AtmaNirbhar Nidhi.
Milind Mhaske, CEO of the NGO Praja Foundation, said municipal bodies should be frugal in their spending on events. “While there is no denying that one does need inauguration events to ensure that the proposed works are conveyed to the public, it can be done on a smaller scale,” he said.