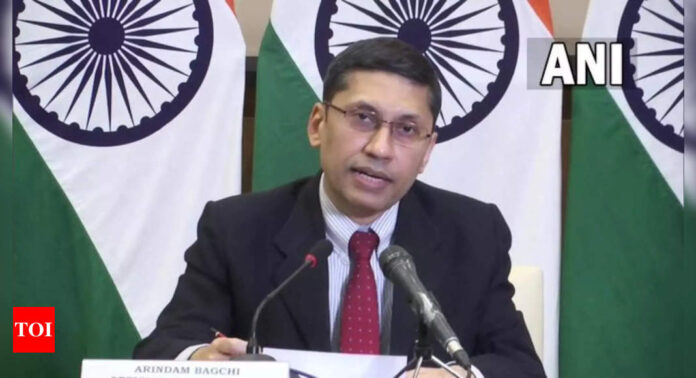 NEW DELHI: India on Thursday asserted that peace and tranquility along the Line of Actual Control (LAC) are essential for overall development of bilateral relationship with China.
The comments by external affairs ministry spokesperson Arindam Bagchi came at a media briefing when asked about new Chinese foreign minister Qin Gang’s remarks that both sides are willing to ease the situation in context of the border standoff along the Line of Actual Control (LAC).
“You are aware of India’s long-standing position – that ensuring peace and tranquillity in the border areas is essential for the development of our relationship,” Bagchi said.
“So too is the observance of bilateral agreements and refraining from unilateral attempts to change the status quo of the boundary,” he added.
In an op-ed article in a US-based magazine days before he became the foreign minister, Qin wrote: “As to the border issues between China and India, the status quo is that both sides are willing to ease the situation and jointly protect peace along their borders.”
India and China are locked in a lingering border standoff in eastern Ladakh for over 31 months. The bilateral relationship came under severe strain following the deadly clash in Galwan Valley in Eastern Ladakh in June, 2020.
India has been maintaining that the relationship cannot be normal unless there is peace in the border area.
“I have a lot of faith in our armed forces to defend our territory,” Bagchi said when asked about some reports of China allegedly carrying out certain constructions in areas claimed by India.
He said discussions were underway between India and China through military and diplomatic channels.
These are the mechanisms through which our concerns about Chinese activities are conveyed, he said.
Bagchi said both sides are also focusing on getting back to a degree of normalcy and de-escalation and disengagement at the border.
There has been a fresh spike in tensions between India and China after troops from the two sides were engaged in a clash along the LAC at Yangtse in the Tawang sector of Arunachal Pradesh on December 9.
Defence minister Rajnath Singh said in Parliament on December 13 that the Chinese troops tried to “unilaterally” change the status quo in the Yangtse area but the Indian Army compelled them to retreat by its firm and resolute response.
To a separate question on the World Health Organization (WHO) holding that China is under-reporting Covid-19 infection numbers, Bagchi only said: “We hope countries will closely coordinate with WHO and share necessary information so that we can come out of Covid faster.”