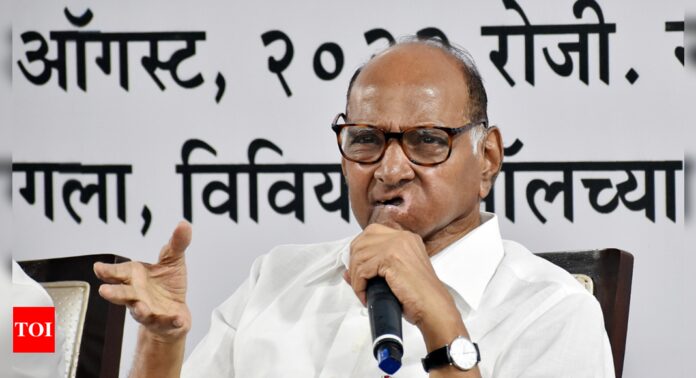 KOLHAPUR: Nationalist Congress Party chief Sharad Pawar on Sunday pitched for contesting the 2024 Maharashtra Assembly and the Lok Sabha polls together with the Uddhav Thackeray faction of the Shiv Sena and Congress.
Talking to reporters, he claimed that despite a split in the Shiv Sena, majority of the “hardcore” Shiv Sainiks who work on the ground stand behind Uddhav Thackeray.
Pawar said MLAs and MPs may have aligned with the Eknath Shinde faction of the Shiv Sena after the split, but when polls take place, they will also know what the views of people are.
After the 2019 Maharashtra Assembly elections, Thackeray had snapped ties with long-term ally Bharatiya Janata Party (BJP) and tied-up with the NCP and Congress to form the Maha Vikas Aghadi (MVA) government in the state.
The Thackeray government collapsed in June last year after a revolt led by Shinde against the Sena leadership.
To a query on the issue of alliance, Pawar said, “The understanding is that the Congress, NCP and Uddhav Thackeray should work together (for the Lok Sabha and Maharashtra polls). The Republican Party and some groups should be included. But we are having discussions. We take decisions jointly on many issues, so there should not be any problem in this.”
The NCP chief had last year also said the MVA allies should fight the Maharashtra Assembly elections together.
The Lok Sabha polls are due in May 2024 and the Maharashtra Assembly elections are due in October next year.
Thackeray had in November last year predicted mid-term polls in Maharashtra and asked his party workers to start the preparations.
On the issue of the ongoing border dispute between Maharashtra and Karnataka, Pawar said Maharashtra Chief Minister Eknath Shinde had convened a meeting with different parties.
The case should be strongly presented before court by roping top legal experts of the country, he added.
The border dispute is currently pending before the Supreme Court.
The issue dates back to 1957 after the reorganisation of States on linguistic lines. Maharashtra laid claim to Belagavi, which was part of the erstwhile Bombay Presidency, as it has a sizeable Marathi-speaking population. It also laid claim to over 800 Marathi-speaking villages which are currently part of Karnataka.
Karnataka maintains the demarcation done on linguistic lines as per the States Reorganisation Act and the 1967 Mahajan Commission Report as final.