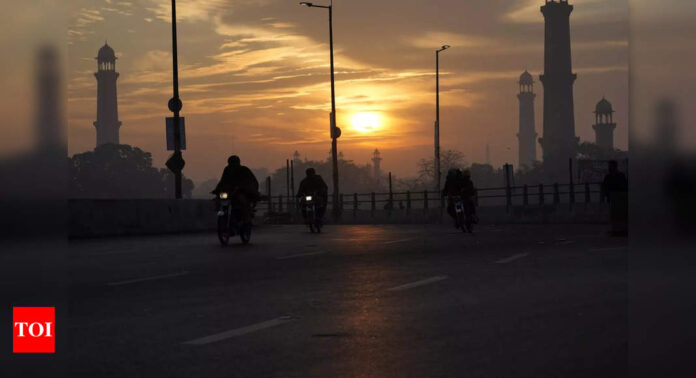 ISLAMABAD: Pakistan’s new year celebrations were marred by customary gunfire by the exuberant revellers in several big cities, injuring at least 22 people, including children and women, in the Karachi metropolis.
As the clock struck midnight to announce the arrival of the new year on Saturday, the port city resonated with the sounds of heavy gunfire.
According to Pakistan television network Geo TV, several people, including a child and women, were injured in the aerial firing in different parts of Karachi despite a ban on the display of firearms.
Sources from the hospitals said eight people with injuries were admitted to the Civil Hospital, four to Jinnah Hospital, and ten, including women and children, were taken to Abbasi Shaheed Hospital for treatment.
So far 13 people have been arrested in connection with the firing in Korangi, three of whom have been charged with attempted murder.
The channel further reported that Karachiites took to the streets and roads to celebrate the new year. The Five Star Chowrangi was thronged by people in a festive mood. Sindh Governor Kamran Tessori was also seen joining the masses to watch fireworks at the Numaish Chowrangi.
Other sites that were thronged by people to witness the annual bash included Clifton Seaview, Do Darya, Bahria Town and Bagh Ibn Qasim. Separately, various clubs, hotels and organisations also organised fireworks to welcome 2023.
Similar reports of celebrations were also received from Lahore, Islamabad and Rawalpindi. Incidents of injuries due to gunfire were also reported from Lahore but it was independently confirmed.
The new year celebrations have been controversial in Pakistan as clerics look down on the revelries and consider it a sin to imitate western culture. However, over the years an increase has been noticed in the number of people taking to the streets to celebrate this annual event.
Traditionally, club-carrying activists of right-wing Jamaat-e-Islami would disrupt the gathering of youths and roam on the streets of big cities to scare people away. However, they too have toned down their ‘pious’ work with the passage of time.
President Dr Arif Alvi and Prime Minister Shehbaz Sharif felicitated the nation and international community at the beginning of the New Year and prayed for the development, progress and prosperity of Pakistan as well as peace in the world.
In their separate messages, they stressed the need to work together to make Pakistan the cradle of peace, prosperity and development, according to their official statements.
The President in his message said the nation faced various challenges last year but overcame difficult situations due to hard work, sacrifice, determination and resilience.
“In the new year, as a nation we must set our priorities correctly to overcome the challenges facing the nation,” he said.
The Prime Minister in his message hoped that the new year would prove to be the year of ending hunger, war, terrorism, crime, sectarianism and class division from the whole world, including Pakistan.
The Prime Minister reiterated his resolve to “work day and night for improvement of the economic situation of the country, rehabilitation of flood victims, end of terrorism and reduction in sufferings of the people.” PTI SH