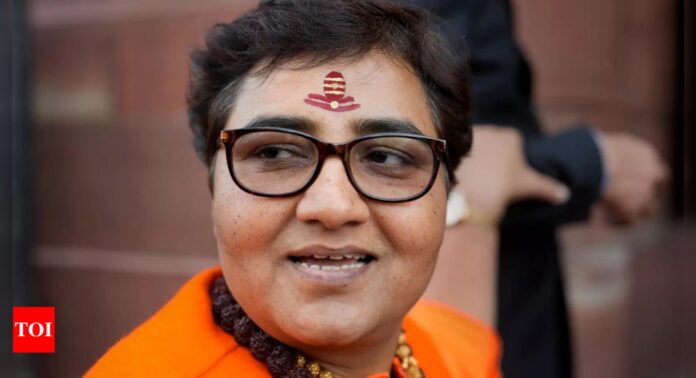 NEW DELHI: Over 100 former bureaucrats on Saturday sought action against Pragya Thakur, the BJP Lok Sabha member from Bhopal, over her alleged inflammatory speech in Karnataka, claiming it “fomented hate against non-Hindu communities”.
In an open letter, they said Thakur has forfeited the ethical right to be a Member of Parliament with her incendiary speech and repeated propagation of hate.
“A particular responsibility devolves on the Houses of Parliament which make laws for the country. Surely its members cannot be permitted to violate the principles of the Constitution?
“We therefore urge the honourable Speaker of the Lok Sabha to take immediate action to refer the matter to the Committee of Ethics of the Lok Sabha for such action as may be deemed appropriate,” it said.
Thakur had on December 25 in Shivamogga said Hindus have the right to respond to those who attack them and their dignity as she spoke about the killing of Hindu activists.
Speaking at the Hindu Jagarana Vedike’s southern region annual convention, she had also told the gathering to give a befitting reply to anyone who “infiltrates our house.”
Though Thakur appears to have cleverly chosen her words to avoid criminal charges being made against her, the disguise is only a thin one, the former bureaucrats’ letter said. “She is obviously fomenting hate against non-Hindu communities, and advocating violence against them.”
Former Lieutenant Governor of Delhi Najeeb Jung, ex-foreign secretary Shivshankar Menon, former Indian Police Service (IPS) officers A S Dulat, Julio Ribeiro, and Amitabh Mathur, and ex-Indian Administrative Service (IAS) officers T K A Nair and K Sujatha Rao are among 103 signatories to the letter written by the collective ‘Constitutional Conduct Group’.
They said that by her “incendiary words”, Thakur has not only committed several offences under the Indian Penal Code, but has also violated the oath taken by her as Member of Parliament to uphold the Constitution of India, which is premised upon the rights to life and liberty, secularism, equality, and fraternity.