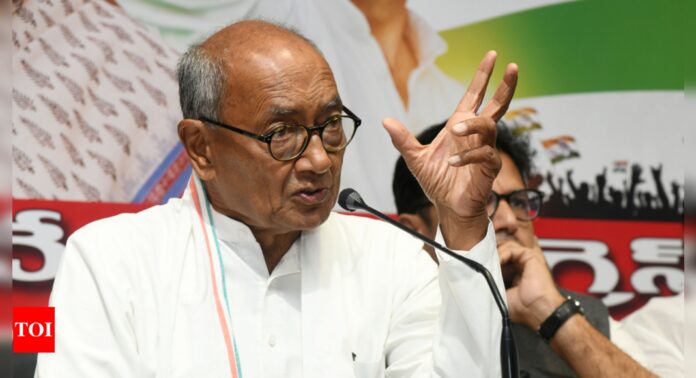 NEW DELHI: Most of the Opposition parties have decided to oppose the Election Commission’s proposal on remote electronic voting machine (RVM) as it is “sketchy” and not “concrete”, senior Congress leader Digvijaya Singh said on Sunday, a day before the poll panel showcases an RVM prototype to representatives of parties.
He made the remarks after a meeting of Opposition parties facilitated by the Congress that was attended by leaders of the JD(U), Shiv Sena, CPI, CPM, National Conference, Jharkhand Mukti Morcha, Peoples Democratic Party (PDP), Viduthalai Chiruthaigal Katchi (VCK), Revolutionary Socialist Party, Indian Union Muslim League, as well as Independent Rajya Sabha MP and former Congress leader Kapil Sibal.
CPI general secretary D Raja said all the parties that were at the meeting will also attend the Election Commission’s prototype demonstration and raise critical concerns.
Singh said the Nationalist Congress Party and the Samajwadi Party were also on board the Opposition deliberations, though their representatives were not present at the meeting.
“The overall view of all political parties that attended today was to unanimously oppose the proposal of RVM because it is still very sketchy. The proposal is not concrete. There are political anomalies and problems in the proposal,” Singh said.
“The definition of migrant labour, the number of migrant labour is all not very clear. Therefore, we all have unanimously made up our mind to oppose the proposal of RVM,” he said.
Singh said the EC has asked the parties to give their reply by January 31, and so those parties that attended the meeting will meet again on January 25 and send their reply either jointly or separately but with a clear view that they “don’t support RVM”.
At the same time there have been numerous concerns about the trust on EVM machines and all those concerns which have been documented after a detailed discussion with computer science experts, professionals and cryptographers will be raised, he said.
Singh noted that the civil society had given a memorandum to the EC in May 2022 but the poll panel had not even responded to them.
“We shall discuss all these issues on January 25,” he added.
Responding to a question, Singh said all parties that had expressed concern over EVMs and RVMs were invited.
He said BSP chief Mayawati has also spoken against EVM. “We invite her to join this initiative,” he said.
“The proposal given by the EC is most impractical, They have given a figure of 30 crore of migrant labour when survey has not been done,” he said.
Significantly, no TMC representative was present at the meeting.
Speaking with reporters, Raja said the EC has convened a meeting on RVMs and the parties that met Sunday will all attend Monday’s meeting and raise critical questions about EVMs, RVMs and migrant labourers.
“Without taking political parties into confidence the EC cannot decide anything unilaterally,” he said.
RJD leader Manoj Jha said Opposition parties will ask all sorts of questions and raise three issues of credibility — credibility of commission, credibility of definition of migrant worker and credibility of the very idea of Article 324 — holding free and fair elections.
A statement issued after the meeting said sixteen opposition parties held a meeting at the Constitution Club here to discuss the joint strategy for Monday’s meeting convened by the EC.
The Opposition parties deliberated on the questions to be placed before EC regarding RVMs.
“It was decided that the ECI’s response to the questions raised by the parties in tomorrow’s meeting will be collectively be considered later and the opposition parties will take a joint stand on the issue,” the statement said.
The poll panel has invited eight recognised national parties and 57 recognised state parties for a demonstration on Monday morning.
A letter sent to them by the EC states that they have been invited for a “discussion on improving voter participation of domestic migrants using remote voting.”
During the demonstration of the remote EVM, members of EC’s Technical Expert Committee will also be present.
While inviting parties for the demonstration of the prototype, the poll panel had also issued a concept note on the technology.
Parties were also asked to give in writing their views by end of January on issues such as changes required on the law to allow the use of RVM.
If implemented after stakeholder consultations, migrant voters do not need to travel to their home districts to exercise their franchise.