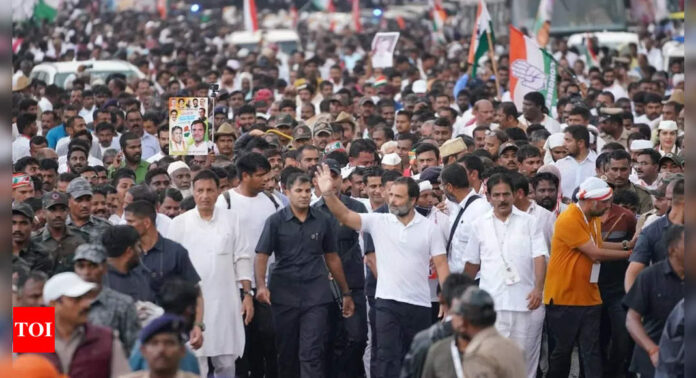 NEW DELHI: Maintaining a studied silence on the buzz around former Congress leader Ghulam Nabi Azad’s re-entry into the party when Bharat Jodo Yatra, led by Rahul Gandhi, enters Jammu and Kashmir, top Congress leaders said on Monday no invite had been extended to the former J&K chief minister to walk alongside the Gandhi scion.
Bharat Jodo Yatra will resume the concluding leg of its journey from Delhi on Tuesday to culminate in Srinagar on January 30, where Rahul Gandhi will hoist the tricolour.
AICC General Secretary (Organisation) KC Venugopal said Bharat Jodo Yatra is “open for anyone to join in” and that leaders like Farooq Abdullah and Omar Abdullah, Mehbooba Mufti and Yusuf Tarigami have already expressed their desire to walk alongside Rahul.
Mufti, TOI has learnt, conveyed her desire to walk in the Yatra in a communication to former Congress chief Sonia Gandhi.
While the party leadership remained non-committal about Azad’s attendance, sources said at least a dozen leaders from Azad’s recently launched Democratic Azad Party (DAP), who had exited Congress with him, are expected to return to Congress in the run-up to the Yatra entering J&K.
This is expected to be the second big jolt to the attrition-hit DAP which Azad launched in September, after leaving Congress. Last week, nearly 100 workers of DAP quit after Azad expelled three long-term aides— former deputy CM Tara Chand, former minister Manohar Lal and former MLA Balwan Singh for ‘anti-party’ activities.
On Monday, Venugopal also reiterated Congress’ concerns over security lapses in the Yatra and said that while he had written to Home minister Amit Shah apprising him of the serious lapses in both Haryana and Delhi, the minister had failed to follow to acknowledge and respond to the letter.