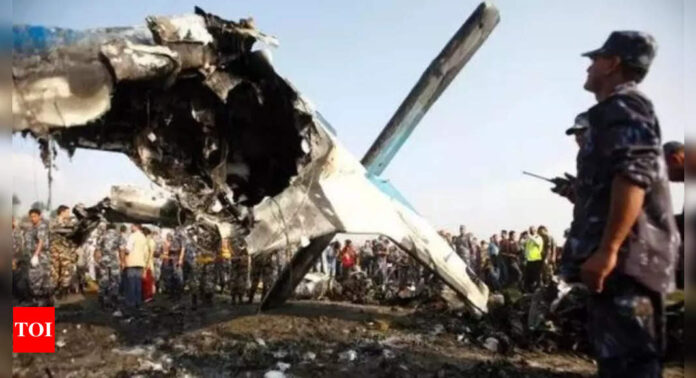 NEW DELHI: A 72-seat passenger aircraft belonging to Yeti Airlines tragically crashed upon landing at Pokhara International Airport in Nepal‘s Kaski district on Sunday. At least 40 lives have been lost, reported news agency Reuters.
There were 5 Indians, 4 Russians, 1 Irish and 2 South Korean nationals among the passengers.
Emergency rescue operations are currently being conducted at the airport with bodies being recovered, stated reports.
A total of 72 people – 68 passengers and 4 crew members – were on board the ill-fated flight, as confirmed by a spokesperson for Yeti Airlines.

Images and videos of the crash posted on social media showed smoke billowing from the site.

As per reports, the airport has been closed temporarily owing to the incident. Pokhara, in central Nepal, is a lakeside tourist mecca nestled below the Annapurna mountain range.

More details related to the accident are awaited.
Past crashes in the country