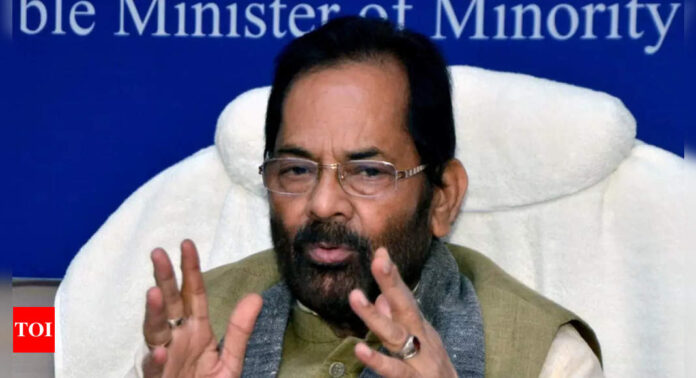 NEW DELHI: Former minority affairs minister and senior BJP leader Mukhtar Abbas Naqvi on Wednesday hailed RSS chief Mohan Bhagwat‘s remarks on Muslims and said the spirit of partnership and not the battle to dominate leads to the path of development.
Naqvi’s assertion came after Bhagwat said Muslims have nothing to fear in India, but they must abandon their “boisterous rhetoric of supremacy”.
In an interview to Organiser and Panchjanya, Bhagwat said, “The simple truth is this, Hindustan should remain Hindustan. There is no harm to the Muslims living today in Bharat… Islam has nothing to fear. But at the same time, Muslims must abandon their boisterous rhetoric of supremacy.”
“We are of an exalted race; we once ruled over this land, and shall rule it again; only our path is right, rest everyone is wrong; we are different, therefore we will continue to be so; we cannot live together; they (Muslims) must abandon this narrative. In fact, all those who live here whether a Hindu or a communist must give up this logic,” the RSS chief said.
Speaking with journalists here on Bhagwat‘s remarks, Naqvi said, “The spirit of participation and not the battle to dominate leads to the path of development and trust. The result of this is that out of every 10 Muslims in the world, one is living in India. His social, economic and educational rights are completely secure and strong.”
“But the problem is not of common Muslims, it is of the ‘contractors’ vying for Muslim votes. These people do not want Muslims to be a part of inclusive development and society,” he said in an apparent swipe at the Opposition.
But today the environment has changed and because of this there has been a “lockout” on the shops of contractors vying for Muslim votes, he said.
In his remarks, Bhagwat had said the new-found aggression among Hindus the world over was due to an awakening in the society that has been at war for over 1,000 years.
“You see, Hindu society has been at war for over 1,000 years – this fight has been going on against foreign aggressions, foreign influences and foreign conspiracies. Sangh has offered its support to this cause, so have others.
There are many who have spoken about it. And it is because of all these that the Hindu society has awakened. It is but natural for those at war to be aggressive,” Bhagwat had said.