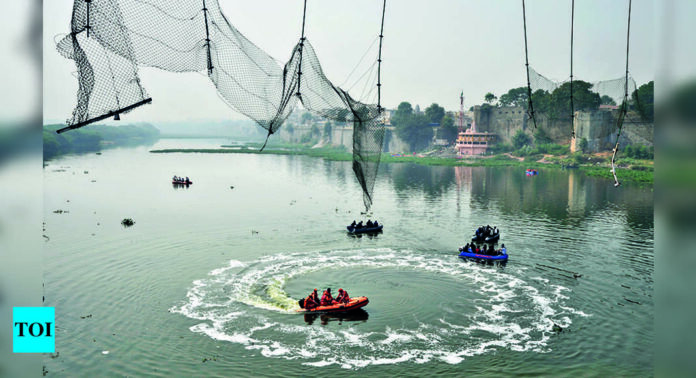 AHMEDABAD: Eight accused persons arrested for the Morbi bridge tragedy have withdrawn their bail pleas from the Gujarat high court, after Justice Samir Dave showed an inclination to reject their applications as the investigation is underway and the chargesheet has not yet been filed.
The managers of Ajanta Manufacturing Co Ltd of Oreva Group Dinesh Dave and Deepak Parekh; ticket clerks and security guards Madev Solanki, Mansukh Topiya, Alpesh Gohil, Dilip Gohil and Mukesh Chauhan; and Devang Parmar and Prakash Parmar, the owners of Devprakash Solutions, which was sub-contracted to repair the bridge; had approached the HC for bail after a Morbi court refused to grant them bail last month.
These persons have been booked under Sections 304, 308, 336, 337 and 114 of the IPC – for culpable homicide not amounting to murder, acting in a rash and negligent manner to endanger people’s lives and abetment. The Morbi suspension bridge had collapsed on October 30, killing 135 persons and injuring 56.
On Monday, their advocates requested the court to look into the roles of these accused persons and argued that most were working for Oreva Group and they had nothing to do with the agreement to maintain the bridge and the contract awarded for repair and maintenance. After hearing the case, Justice Dave expressed his inclination to reject the petitions with the chargesheet pending. This led the lawyers to request the court to permit them to withdraw the bail pleas with the liberty to file them afresh once the chargesheet has been filed.