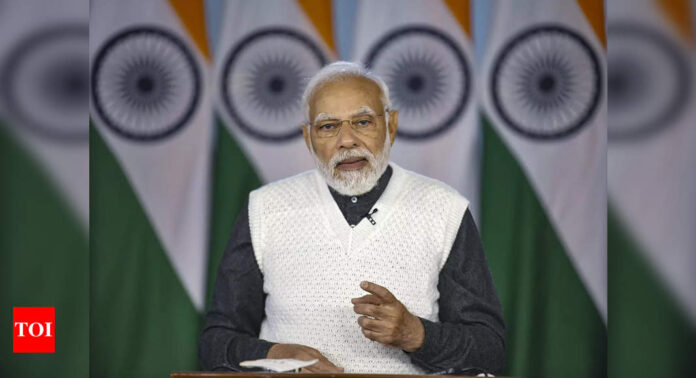 NEW DELHI: PM Narendra Modi on Tuesday said he was confident that the country’s scientific community will help India achieve the position it deserves in the 21st century, and urged scientists to step up their efforts in various fields to make the country “the most advanced laboratory of modern science” in the ‘Amrit Kaal’ – the next 25 years leading to the centenary of India’s independence.
Addressing the 108th Indian Science Congress (ISC) through a video conference, he also appealed to the scientific community to focus on critical areas like vaccine development to deal with threats of new diseases, energy requirement and waste management which will help not just in dealing with pollution but also in saving valuable resources through circularity.
“Today, we are living in such an era when humanity is facing the threat of new diseases. We have to promote research and development to prepare new vaccines in the same way we are prepared in advance to deal with catastrophes like floods or earthquakes. Similarly, we have to identify diseases well in time through Integrated Disease Surveillance and take measures to deal with them. Different ministries will have to work together to achieve this goal,” said Modi while virtually inaugurating the five-day ISC being held in Nagpur.
Underlining that there are immense possibilities of scientific research in the waste management sector, he said, “Municipal solid waste, electronic waste, bio-medical waste, agricultural wastes are such areas, which are continuously expanding. This is the reason the government laid a lot of emphasis on the circular economy in last year’s budget.
“Now we have to further strengthen the Mission Circular Economy. For this, we have to work on such innovations which can make better use of metal and plastic scrap. We have to work simultaneously on curbing pollution and making scrap useful.”
Referring to India’s growing energy needs, he said, “In such a situation, if the scientific community of India makes innovations related to energy requirements, then it will be of great benefit to the country.”
The focal theme of this year’s ISC is ‘Science and Technology for Sustainable Development with Women Empowerment’ which will witness discussions on issues of sustainable development, women empowerment and the role of science and technology in achieving this.
Expressing happiness about the theme of the Science Congress this year, which combines sustainable development with women empowerment, the PM emphasised the complementarity between the two areas. He stressed, “Our thinking is not just that we should empower women via science but also empowering science by the contribution of women.”
The PM recalled how India is fast becoming one of the top countries of the world in the field of science. “Out of 130 countries, we were at number 81 in the Global Innovation Index till 2015. But we have jumped to 40th position in 2022. Today India is among the top three countries in the world in terms of PhDs. Today India is among the top three countries in terms of start-up ecosystem,” he said.
Noting that the one who takes the initiative takes the lead in science, he said Indian scientists will not only have to be aware of what is going on around the world but at the same time focus on works which are not being done anywhere and which are futuristic ideas. “Today there is debate on AI (artificial intelligence), AR (augmented reality), and VR (virtual reality) in the world. We have to include these issues in our priorities,” he said.