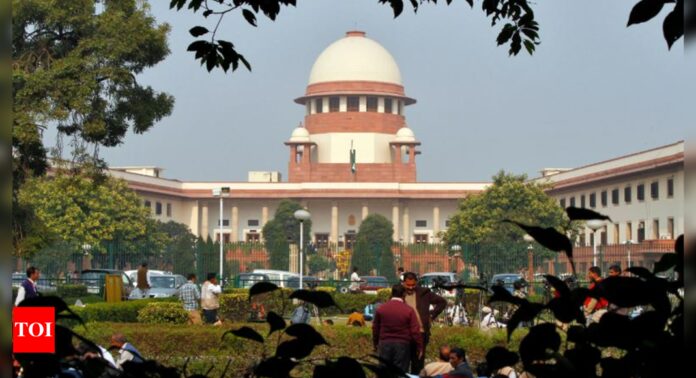 NEW DELHI: The Supreme Court on Friday refused to entertain a PIL seeking a direction to the Centre to declare the Law Commission a “statutory body” and appoint the panel’s chairperson and members.
A bench of Chief Justice D Y Chandrachud and Justice P S Narasimha noted the submission of Attorney General R Venkataramani that the 22nd Law Commission has already been constituted.
“It is a settled proposition of law that a writ of mandamus cannot be issued to the Parliament to enact a law. That pertains exclusively to the legislative domain. We decline to entertain the petition,” the bench said.
The top court also noted the submission of the petitioner advocate Ashwini Kumar Upadhyay that he would pursue the issue before the law panel.
In a reply to the PIL, filed by the Ministry of Law and Justice in December 2021, it was said that there was no proposal under consideration to make the Law Commission a statutory body.
The ministry had submitted that the petition filed by Upadhyay is frivolous and not maintainable as being devoid of merits.
The PIL, which made the ministries of home affairs and law and justice as well as the Law Commission of India as parties, said the cause of action arose on August 31, 2018 and is still continuing when the tenure of the 21st Law Commission ended but the Centre has neither extended the tenure of its chairperson and members nor notified the 22nd Law Commission.
“Although on February 19, 2020, the Centre approved the constitution of Twenty-second Law Commission but it has not appointed the chairperson and members till date,” Upadhyay said in the petition filed through advocate Ashwani Kumar Dubey.
The plea, which sought a direction to the Centre to appoint the chairperson and members to the 22nd law panel, has also urged the top court to do the needful itself.
“Alternatively, being custodian of the Constitution and protector of fundamental rights, the Court may be pleased to use its plenary constitutional power to appoint the chairperson and members of the Twenty Second Law Commission of India and declare that the Law Commission of India is a statutory body,” it said.
Upadhyay has sought direction to the law panel, to be set up, to also consider his submission seeking action on the Vohra Commission report on alleged nexus between politicians and criminals.
The PIL also sought action from the law panel on the plea “seeking 100 per cent confiscation of black money, benami property and disproportionate assets and life imprisonment to looters as a Representation and preparing two separate reports within three months”.