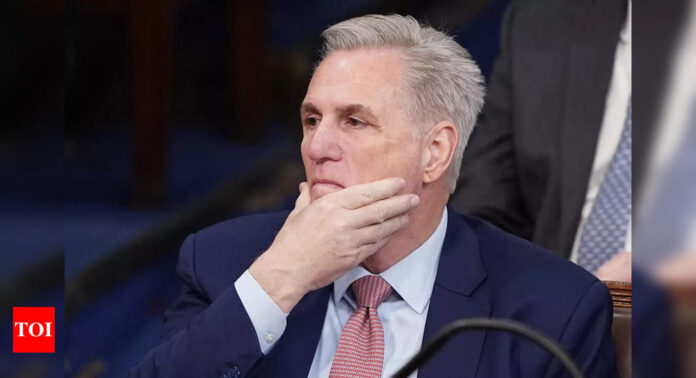 WASHINGTON: Republicans in the House of Representatives failed for a second straight day to elect a leader on Wednesday, as a faction of holdouts repeatedly defied former President Donald Trump’s call to unite behind his ally Kevin McCarthy.
After three failed votes and a round of closed-door talks, McCarthy appeared no closer to securing the post of House speaker, a powerful job second in the line of succession to the presidency.
Lawmakers voted to go home for the evening and try again at 12 p.m. (1700 GMT) on Thursday.
The stalemate raised questions about Republicans’ ability to govern over the coming two years as they stumbled over what is usually a routine vote at the outset of a legislative session.
House members must first name a leader before swearing in individual members and taking up legislative business.
McCarthy, from California, has served as the top House Republican since 2019 and led his party’s successful effort to win control of the chamber in the 2022 midterm elections.
But he has now fallen short in six straight votes over two days, as a group of 20 hardline conservatives who have deemed him ideologically unreliable have refused to back him, leaving him short of the 218 votes needed to win the job.
McCarthy’s supporters grew increasingly frustrated as the day wore on.
“You have 20 people demanding that 201 surrender to them unconditionally. Well, I will not surrender unconditionally,” Republican Representative Trent Kelly said at a news conference.
The leadership fight has provided a dismaying start for the new Republican majority in the House after the party managed to secure a slim 222-212 majority in November’s elections.
The internal struggle underscores the challenges the party could face over the next two years, heading into the 2024 presidential election.
The last time the House failed to elect a speaker on the first ballot was in 1923, during a contest that took nine ballots to resolve.
McCarthy said he was making progress. “I don’t think voting tonight does any difference, but I think voting in the future will,” he told reporters after meeting with opponents.
His supporters had hoped that repeated votes would wear down opponents. But as the day progressed with no sign of headway, Republican faith in McCarthy’s success appeared to be flagging.
“At some point, there will be a speaker, and it will be a Republican,” Representative Tom Cole predicted.
Other names floated as possibilities included No. 2 House Republican Steve Scalise and Representative Jim Jordan – who received 20 votes when nominated on Tuesday. Both said they backed McCarthy.
Compromise candidate?
The possibility of the House electing a Republican speaker with Democratic help appeared to gain traction.
Progressive Democrat Ro Khanna said he could support a moderate Republican who would agree to share subpoena power with Democrats and to avoid brinkmanship over government funding and the debt ceiling. He cited House Republicans Brian Fitzpatrick, Mike Gallagher and Dave Joyce as possibilities.
“I’m open to it,” Khanna told Reuters, adding that other Democrats could also be on board. “There’d be a significant number if it’s the right Republican with the right commitments.”
House Democratic leader Hakeem Jeffries told reporters that Republicans had not approached Democrats about that option.
Republicans sought to determine whether McCarthy could garner enough votes to succeed as speaker by negotiating deals with holdouts. The group wants greater control over leadership and more influence over spending and the debt.
McCarthy secured only 201 votes of the 218 needed, while 20 Republicans voted on Wednesday for Representative Byron Donalds, a Republican first elected in 2020. One Republican declined to back a specific candidate. All 212 of the chamber’s Democrats voted for Jeffries.
Opponents said the leadership fight could drag on for weeks.
“It’s worth taking a few days or a few weeks to get the best possible speaker,” said Republican Representative Bob Good, one of the holdouts.
The vote was also a rebuke of Trump, who urged fellow Republicans to set aside their differences.
“It’s now time for all of our GREAT Republican House Members to VOTE FOR KEVIN,” Trump wrote on his social media site Truth Social on Wednesday ahead of the day’s votes.
Trump remains an influential figure among Republicans and is so far the only announced presidential candidate for 2024. Some in the party have blamed Trump for the failure of Republicans to win more congressional seats in the midterms.
Republican control of the House could empower the party to frustrate Democratic President Joe Biden‘s legislative agenda. But the standoff raised questions about whether the House will be able to meet basic obligations such as funding government operations, let alone advance other policy priorities.
“This is not a good look,” Biden said of the House leadership struggle, speaking to reporters at the White House. “This is the United States of America, and I hope they get their act together.”