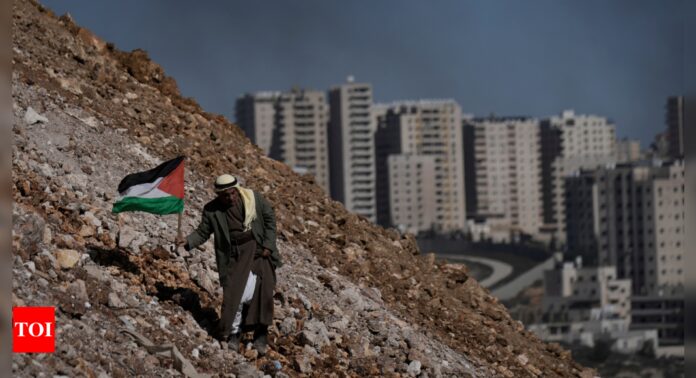 JERUSALEM: Israeli security forces on Friday evicted a small group of Jewish settlers from an outpost they erected hours earlier in the occupied West Bank, upsetting pro-settlement members of Prime Minister Benjamin Netanyahu’s government.
The group had built a handful of small, temporary structures on a rocky field near a larger Jewish settlement, according to pictures carried by Israeli media. Similar outposts have been built and removed many times over the years.
While there were no reports of violence or injuries between the settlers and security officers, Friday’s eviction was a test for Netanyahu’s new government, which took office about a month ago and includes senior ministers from the far right.
A member of Netanyahu’s conservative Likud party heads the Defence Ministry, which runs the authority that coordinates policy in the West Bank, though it ceded some settlement policymaking to hardline politician Bezalel Smotrich.
Smotrich on Friday had instructed the authority that coordinates policy not to remove the outpost until after a discussion next week, according to a statement from his office.
The statement said that defense minister Yoav Galant went ahead regardless and ordered its removal, “completely contradicting the coalition agreements that form the basis for the government’s existence.”
Netanyahu issued his own statement afterwards, saying that “the government supports settlement but only when it is done legally and is coordinated in advance with the prime minister and security officials, which was not done in this case.”
Most countries view settlements that Israel has built on land captured in a 1967 war as illegal and their expansion as an obstacle to peace, since they eat away at land the Palestinians claim for a future state.
Israel disputes that and cites biblical, historical and political links to the West Bank, as well as security interests.
The Palestinian Foreign Ministry, before the outpost’s removal, had condemned its building, calling it “a flagrant challenge to international and US requests that Israel’s unilateral and illegal measures must end.”
There were minor clashes with stone throwing at the site between Jewish settlers and Palestinians from a nearby village, according to Palestinian witnesses.