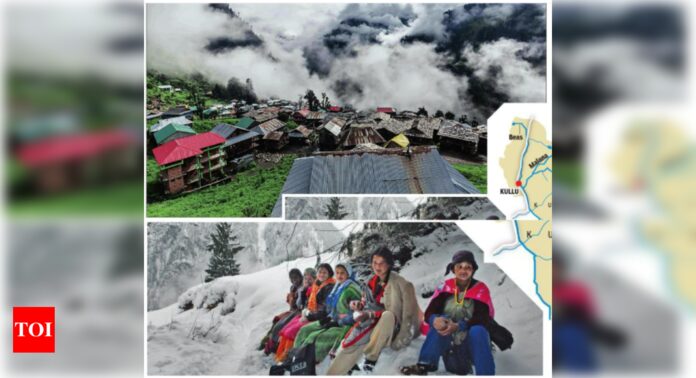 When Alexander turned back from the Beas in Punjab, in 326 BCE, legend says some of his soldiers continued eastward into the mountains and settled down at a place now known as Malana in Himachal Pradesh. Surrounded by vertical mountain walls, this village in Kullu district’s Parvati valley remained hidden from the outside world for centuries. Its unique language – Kanashi – culture and people’s distinctive features lent weight to the legend. But are Malana’s inhabitants really the descendants of Alexander’s army?
DNA To Solve Mystery
Although studies on Malana’s culture and language have been done over the past 70 years, it’s only now that its ‘Greek connection’ is being probed. Dr Anil Kumar Singh, an expert on Hellenic studies from Delhi’s Jawaharlal Nehru University (JNU), has teamed up with Greek scholars to unravel this mystery.
Singh, who teaches at the School of Language, Literature and Culture Studies, JNU, and heads the IndoHellenic Research Centre, says it can’t be said “beyond doubt that all the soldiers who were part of Alexander’s army went back home. Some must have stayed back”. He plans to make a multidisciplinary research team within the next six months that will use the latest scientific techniques. “I am hopeful that we will have a team of scholars from various fields, including genomics, by the time we have our next scheduled conference in Venice in September this year…. We are going to use DNA analysis to find out whether the legend is true or not.”
This won’t be the first genetic study in Malana, though. In 2010, Indu Talwar and Rajiv Giroti’s research showed Malana is a ‘genetic isolate’ with little or no genetic mixing with other populations. But that was largely attributed to the village’s historic isolation and the practice of endogamy (marriage within the community).
History is silent
Malana has been a topic of serious research since at least the 1950s when Collin Rosser, an anthropologist, spent two years studying its language, culture and democratic system of governance. Rosser had termed Malana “a hermit village”, strongly united against all outsiders. In fact, outsiders are not welcome even today and are made to pay a fine if they touch any object considered sacred.
But over the years, no historical evidence linking Malana to Alexander’s Greek army has emerged. Dr Ory Amitay, a historian at the University of Haifa in Israel and author of ‘From Alexander to Jesus,’ a book that traces Alexander’s life as a mythological figure, says: “I have not seen anywhere even a hint of reliable evidence for an actual connection between Alexander and Malana in antiquity. The rebellion of the soldiers, which forced Alexander to turn back, did happen before crossing the Hyphasis river, now known as the Beas. But Greek and Latin sources do not say anything about anyone who crossed the river and settled there.”
“There is no historical proof that remotely connects Malana villagers with Greek soldiers. This is just a legend,” agrees Lucknowbased historian and author Preeti Singh, who has written a research paper on Malana. Doesn’t Sound Like Greek.
Even the research on Kanashi shows it has no link with ancient Greek. Instead, it is a Sino-Tibetan language closely related to Kinnauri. One theory posits that Malana was founded by Kanashi-speaking people from Himachal’s Kinnaur district.
Perhaps, traders from Kinnaur founded Malana, which lay on an ancient trade route connecting Bushahr in the Satluj valley with the Parvati valley.
Recent research on Kanashi by professor Anju Saxena and Lars Borin from Uppsala University in Sweden also concludes that “Kinnauri-Kanashi speakers had moved to Kinnaur from the southern Uttarakhand region, and later on some of them migrated to the present-day Malana where Kanashi continued developing.”
A colonial fantasy?
So how did Malana get intertwined with Alexander’s army? Dr Amitay, who had visited Malana in the mid-1990s, says, “The story about soldiers could have been invented by some Briton back in the days when the Crown had an empire and the classics were widely read, or even by someone from the flourishing northIndian tourist industry. ”
Dr Richard Axelby, an anthropologist who teaches at SOAS University of London and has written
a paper on Malana, says the story would have been started by European explorers and settlers in the Western Himalayas.
“Europeans in India, the recipients of a classical education, knew that Alexander’s army turned back after reaching the Beas. Hearing about the village of Malana with its unique language, strange customs and system of democracy, 19th-century European travellers would have reached back to explain the isolated community as a remnant of Alexander’s army,” Axelby says, adding, “This connection would have been strengthened as archaeologists like Aurel Stein and JP Vogel uncovered evidence of Indo-Greek kingdoms in NW India.”
‘Children of Jamlu Devta’
Above all, the natives of Malana vehemently reject their Greek origin story. “We are not in any way connected to Greece or Alexander. We never made such a claim,” says Raju Ram, pradhan of Malana village who is in his early 50s. “We are the descendants of Jamlu Devta and we speak a language no one else does or understands. This is the truth about us. The rest is a lie.”
The villagers believe Jamlu came from Tibet to Spiti, entered Malana through the Chanderkhani Pass and founded the village. One of their legends says the gods of Kullu didn’t want Jamlu to settle there, so they kicked a bucket with Jamlu inside it. It soared over the mountains and landed in Malana.
ENDANGERED LANGUAGE
Kanashi is a Sino-Tibetan language spoken by the 2,200-odd inhabitants of Malana, whereas all the surrounding villages speak an Indo-Aryan dialect. It does not have a script so it is passed on orally. A recent study by Sweden’s Uppsala University shows a substantial portion of the Kanashi lexicon is borrowed from Indo-Aryan languages. Linguists have categorised Kanashi as a West-Himalayish language, closely related to Kinnauri, a language spoken by the people of Himachal’s Kinnaur district.