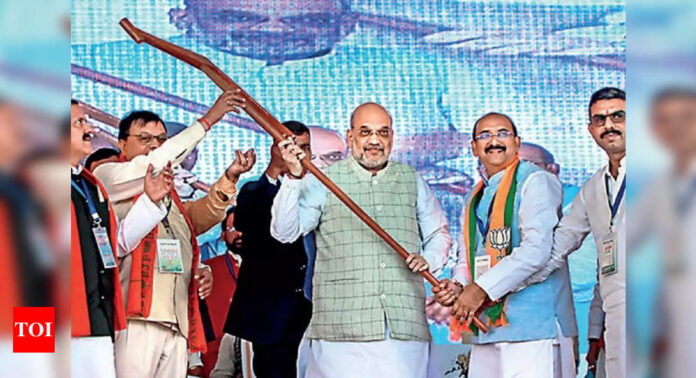 RAIPUR: Union home minister Amit Shah on Saturday said that the Centre is working towards ending the Maoist problem in the country by 2024. “We are now on the verge of making Naxal-affected areas free from the menace,” Shah said at a public meeting organised by BJP in Korba, an industrial town of Chhattisgarh.
“During the Congress regime (at the Centre) in 2009, 2,258 incidents of Maoist violence were reported but incidents declined gradually by 2021 to 509 cases. Our efforts are on to ensure that the entire country is free from the Naxal problem by 2024,” he said. Lok Sabha elections are scheduled that year.
The strategy was to reach out to youths, who used to take up weapons, and provide them employment, roads, water, telephone, electricity and other basic facilities in the remote areas to help them join the mainstream of society, the Union minister said, adding that those who did not lay down their weapons were being given a befitting reply.
Stressing the need for a “double engine” government in Chhattisgarh, Shah appealed to voters to ensure BJP’s return in the state if they want Narendra Modi to be the Prime Minister for a third term. Chhattisgarh has assembly elections in November. “Earlier everyone used to call it a ‘Bimaru’ state, but the 15-year-long BJP government converted it into a developed state,” Shah said.
“Chhattisgarh is dominated by OBCs and STs, but what has the Congress government done for them? BJP gave constitutional right to OBCs by forming a commission. With it, 27% reservation in NEET, Navoday Vidyalaya and Kendriya Vidyalaya and Sainik Schools was made,” he added. Stating that BJP is going to the people with the list of work done during its regime, he alleged that Congress is only “selling lies and has done nothing except corruption in the state”.
“Chhattisgarh is the rice bowl and mineral bowl of the country. PM Narendra Modi constituted DMF aimed at the development of the backward areas and tribal areas,” he said, adding that the Centre distributed Rs 63,000 crore among states under DMF, of which Chhattisgarh got Rs 9,234 crore. “But there is no account for this amount. I will ask where it has gone. Congress leaders used this fund for luxury cars and constructed their bungalows,” Shah alleged. “People will overthrow this corrupt regime in the next elections,” he said.