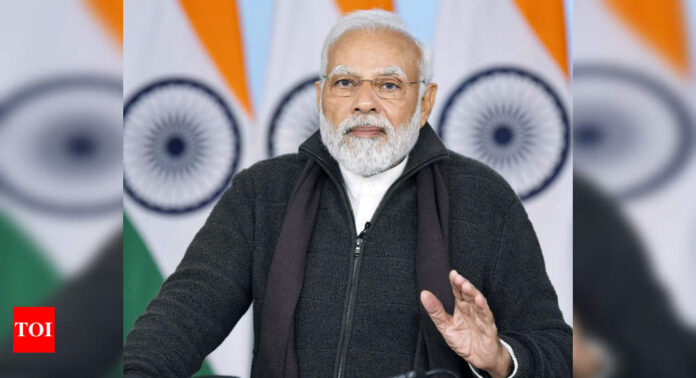 NEW DELHI: At it looks to speak for the developing world, which has been deeply impacted by the Ukraine conflict, India will next week host a virtual ‘Voice of the Global South’ summit. More than 120 countries are being invited for the summit which will be held on January 12-13 under the theme “Unity of Voice, Unity of Purpose”.
Foreign secretary Vinay Kwatra said the “new and unique” initiative was inspired by PM Narendra Modi’s vision of ‘Sabka Saath, Sabka Vikas, Sabka Vishwas and Sabka Prayas’, and underpinned by India’s philosophy of ‘Vasudhaiva Kutumbakam’.
Close to 20 world leaders are expected to participate in the summit, including Bangladesh PM Sheikh Hasina, Lankan President Ranil Wickremesinghe and several ASEAN and African leaders.
The summit, he said, envisaged bringing together countries of the Global South to share their perspectives and priorities on a common platform. The government didn’s confirm if Pakistan, Ukraine and China are on the guest list. Apart from climate, energy and food shortages, one significant issue that the summit will look to address is mounting debt in developing countries, a fallout of opaque and irresponsible lending practices which China is often accused of.
At a media briefing, Kwatra said concerns and apprehensions of the developing countries often do not receive due attention at the global stage and the purpose of the summit would be to address these elements of “our concerns and priorities”.
In a statement, the government said India will work to ensure that the valuable inputs generated from partner countries in the summit receive due cognisance globally and that India’s ongoing presidency of the G20 provides a special and strong opportunity for those countries that are not part of the G20 process to share their ideas and expectations from the grouping. Addressing the concerns of the global south is an important part of India’s agenda for G20.
“This is in line with the PM’s statement that India’s G20 presidency will be shaped in consultation with not just our G20 partners, but also our fellow-travellers in the Global South, whose voice often goes unheard,” it said.
The inaugural and concluding sessions would be at head of state or government level, and hosted by Modi. The summit envisages 10 sessions, of which 4 would be held on January 12, and 6 on January 13.