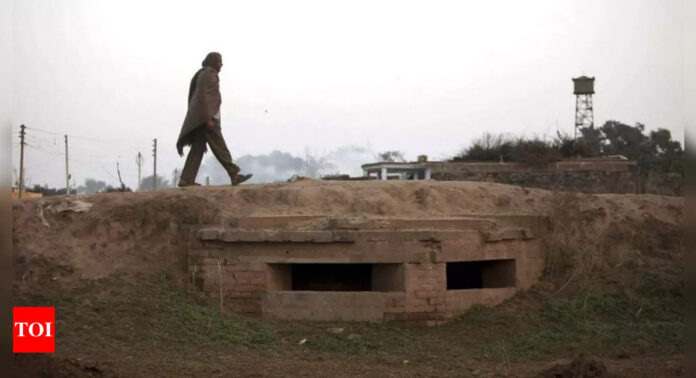 NEW DELHI: For the first time, India is constructing “permanent vertical bunkers” of concrete to station BSF troops right at the strategically significant Sir Creek and ‘Harami Nalla‘ marshy area along the India-Pakistan International Border in Gujarat, official sources said.
The Union home ministry has sanctioned a Rs 50-crore fund for the construction of eight multi-storeyed bunkers cum observation posts in this area along the Bhuj sector in view of the “constant infiltration of Pakistani fishermen and fishing boats in the area”, the sources told PTI.
According to official data, the Border Security Force (BSF) apprehended 22 Pakistani fishermen and seized 79 fishing boats as well as heroin worth Rs 250 crore and charas worth Rs 2.49 crore from this region of Gujarat in 2022.
While three pylon-shaped towers are coming up in the Sir Creek area, a 4,050 sq km marshy area between India and Pakistan, five such concrete structures will be constructed by the Central Public Works Department (CPWD) along the ‘harami nalla’ area spread across 900 sq km, sources said.
The top floor of each of the 42-foot high ‘vertical bunkers’ will have space for mounting surveillance gadgets and radars to keep an eye on the area that comprises serpentine estuaries. The rest two floors will have the capacity to house around 15 armed BSF personnel and their logistics, the officials said.
According to officials, these bunkers are being erected in the Lakhpat Wari bet, Dafa bet and Samudra bet on the eastern side of the creek area, well within Indian territory.
A BSF contingent is providing armed protection to the labourers engaged by the CPWD to complete the construction of the three bunkers in the Sir Creek area by March. The ocean gets too turbulent from April and hence the work is going on at war footing, a senior BSF officer said.
The move to build the bunker came after then BSF director general (DG) Pankaj Kumar Singh, during a tour of Union Home Minister Amit Shah to the Gujarat border in April last year, along with senior officers made a presentation that the creek area and the marshy water body between India and Pakistan were prone to infiltration and the BSF security apparatus was located way behind.
The BSF said it requires eyes right at the front and for that to happen it needed a permanent base, a senior official privy to this meeting said.
It was informed during the presentation that the area is “very sensitive and holds enormous strategic significance” and hence the BSF needs some permanent bases right on the front as compared to the border posts that are currently located about 50-60 km from the creek area.
In order to “dominate” the creek areas, the BSF sends regular foot and boat patrols to keep vigil in the entire 85-km-long coastal region of Gujarat under its control, they said, adding that currently, it takes about five to six hours for troops to reach the border from their posts, onboard speed boats or regular boats.
The creek area has very inhospitable weather and terrain. The marshes are home to poisonous snakes and scorpions. BSF personnel have to move barefoot while undertaking patrols as one cannot walk with boots on in the swamp area, official sources said.
The three bunkers will be the first permanent structures in the area prone to tidal waves every four hours a day. Anything made of metal or any other item corrodes due to high salt content in the area, the officials said.
The BSF has been dominating this area for over six decades. Last year, Indian Air Force helicopters were pressed into service to help the BSF troops find some Pakistani fishermen who had intruded into the Indian side and were untraceable for some time.
Sir Creek is a 98-km disputed territory between India and Pakistan in the Rann of Kutch marshlands, which opens up into the Arabian Sea. It divides the Kutch region of Gujarat and the Sindh province of Pakistan. The two countries have been holding talks to resolve issues related to the border dispute here.