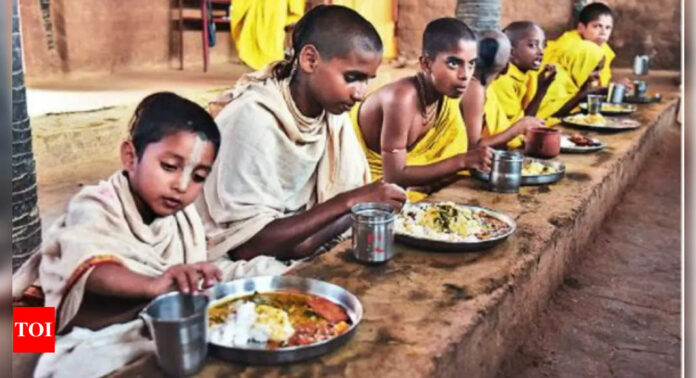 Kurmagram, a ‘Vedic village’ in Andhra Pradesh’s Srikakulam district, is a window into the way our ancestors lived centuries ago. Its houses are mud huts roofed with thatch or tiles. The 56 residents of the 60-acre village built the houses themselves without using steel and cement. They have no electricity, internet, television or cooking gas, nor other modern amenities and gadgets, including mobile phones. There’s just one landline phone for community outreach.
Is it poverty? No, the residents have ditched the trappings of modern life to follow the basic principle of Krishna Consciousness: simple living and high thinking. The 14 families and a few celibate Krishna devotees who live in Kurmagram say this minimalist, self-reliant existencegives their lives more meaning and purpose than affluence.
Radha Krishna Charan Das, who left his IT job for Krishna Consciousness and became a teacher at the village gurukul, said: “Earlier, people were happy with fewer things. The craving for material wealth has unfortunately increased in recent times, which pains me a lot.”
Pastoral Simplicity
Kurmagram lies 6km from Srimukhalingam village that houses the famous 9th-century Lord Srimukha Lingeswara temple. A typical day here begins about 3. 30am and ends at 7. 30pm. The self-reliant lifestyle demands the residents weave their own cloth and grow their own vegetables and grains, including for the prasadam (meals) served to visitors. “Human deeds should only extend to the highest self-realisation, rather than the accumulation of material wealth. For this, we live the way our ancestors lived 300 years ago,” Nateswara Narottam Das, who heads the village gurukul, told TOI. “It may take some more time to achieve full self-sufficiency, but our purpose is clear: simple living with high thinking, as taught by Lord Sri Krishna in the Bhagavad Gita.”
He said the village’s economy is based on land and cows. They grow cereals, pulses, vegetables and some fruits, and barter these with farmers in nearby villages for other cooking essentials.
Taught like The Pandavas
At the village gurukul, children are taught in the Vedic style, with the emphasis on morals, ethical training, and high thinking. “Our day starts with waking up at 3. 30am, followed by Mangala Harathi (aarti) at 4. 30am, japam (meditative repetition of a mantra) for one hour, guru puja, and book reading. The classes start at 9am. We aretaught math, science, Sanskrit, Telugu, Hindi, English, the shastras, arts, and the Mahabharata,” said Siddu Srikant, a shishya at the gurukul.
The children sometimes perform plays based on the Mahabharata and history, which serve as entertainment for the elders. There’s also the daily Harikatha recital (a religious art form consisting of storytelling, poetry, music, and narration).
At the gurukul, they don’t see learning as the accumulation of theoretical knowledge but a means to self-realisation. So, there’s plenty of physical activity too, ranging from swimming and playing in the fields to kabaddi and ‘seven stones’.
The children have a choice of three courses – Bhakti Vriksha, Bhakti Shastri, and Bhakti Vaibhav, said Charan Das. “These three courses take about 10 years each. Based on their interest in further courses, they will be sent to the Vedic university in Salem, Tamil Nadu. ” However, it’s up to a student to choose between higher courses or a job, Charan Das said.
Growing interest
The residents of Kurmagram are not concerned about what happens outside their ashram, but they get a steady stream of news from visitors, whose numbers have been rising as the village’s fame has spread. Hundreds come on weekdays, and thousands on Sundays. TOI found visitors from Telangana and other coastal Andhra districts at the ashram.
Narottam Das said they have been preaching spirituality and spreading Vedic knowledge in the villages surrounding their ashram. “Thousands of people visiting the ashram and gurukul are taught spiritual knowledge and Krishna Consciousness. ” The outsiders are allowed to stay at the ashram if they abide by its principles. Visiting families and the celibate devotees are housed separately.
Some foreign devotees have also made Kurmagram their home. Born in Argentina and an Italian citizen now, Rupa Ragunath Swami Maharaj started visiting India more than 40 years ago in 1978. He was in Kurmagram to deliver a religious discourse when TOI visited.
A Russian national, who has taken the name Nruhari Das, has become a permanent resident of the village. “The ancient Vedic knowledge has brought me to this land. People following the spiritual path do not need to worry about anything as the necessities arising from their austere lifestyle are fulfilled by nature itself,” he said.