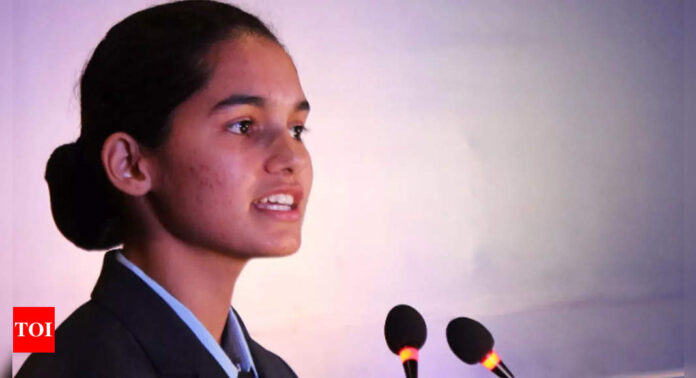 JODHPUR (RAJASTHAN): For the first time, an Indian Air Force (IAF) woman fighter pilot would be part of the Indian contingent for the aerial wargames to be held with outside the country.
The women officers have been participating in wargames with the foreign contingents coming to India including the French Air Force where two of the lady fighter pilots took part but this would be the first time they would be representing the country on foreign land.
One of the first three lady fighter pilots of India, Squadron Leader Avni Chaturvedi will be leaving for Japan shortly for participating in the exercise. Squadron Leader Chaturvedi is a Su-30MKI pilot.
The exercise Veer Guardian 2023 will be carried out from January 16 to January 26 at the Hyakuri Air Base and its surrounding airspace in Omitama, and the Iruma Air Base in Sayama in Japan.
Chaturvedi’s batchmate and part of the troika of first female fighter pilots in the force Squadron Leader Bhavna Kanth termed the Su-30MKIs operated by the Indian Air Force as one of the best and most lethal platforms armed with indigenous weapon systems.
“The Su-30MKi is a versatile multirole combat aircraft which can carry out both air-to-ground and air-to-air missions simultaneously.”
“What is unique about this aircraft is that it can carry out manoeuvres at both high speeds and low speeds. It also has the capability of doing very long-range missions due to multiple refuelling it can do and it has very long endurance,” Squadron Leader Bhavna Kanth told ANI in an exclusive interaction.
She said the aircraft has the latest avionics and can easily integrate any of the latest weapons easily and can carry out missions with ease.
Asked about her feeling as a woman fighter pilot, she said the aircraft does not know whether it was being flown by a man or a woman and she was proud to be part of the esteemed force. Ace fighter pilot Group Captain Arpit Kala heading a Su-30 fighter aircraft squadron in the desert sector said the Indian Su-30MKIs are unique in the sense that they have been equipped with best of technologies and weaponry from the world.
Asked to compare the Indian Su-30MKI with the Su-30s operated by other countries including the ones operated by its original manufacturer Russia, Group Captain Kala said: “What makes the Indian Su-30MKI different from the flankers (Su-30 combat aircraft) operated across the world is that it is a beautiful integration of various weapons, sensors and avionics from all over the world.”
“Its long-range vectors (missiles) including the indigenous air-to-air and air-to-ground weapons give it an edge over others. It is one of the best aircraft in the world,” Kala said.
The officer said the aircraft and the training of the aircrew make it one of the best flankers in the world as the Indian Air Force training is considered one of the best in the world.
He said the integration of the BrahMos supersonic cruise missiles and the Astra air-to-air missiles have made the aircraft more lethal.
Squadron Leader Mukul Bawa also termed the aircraft as a unique aircraft equipped with made-in-India equipment which makes it more lethal.
Officials said the long-range air-launched BrahMos which can go much beyond 500 Km plus would enable the aircraft to take down air defence systems of enemy forces by remaining much out of their reach.
The defence ministry has also cleared the acquisition of the next-generation anti-radiation missiles for the Su-30MKIs which would enable them to strike enemy radars from more than 100 Km ranges.
India is the only country in the world which has equipped its Su-30s with such long-range strike capabilities and has kept modernising the fleet with the latest weapons.
A lot of new equipment has also been incorporated into the Sukhoi fleet during the last two years including the Spice-2000 series precision-guided weapons which are considered to be very effective stand-off weapons.