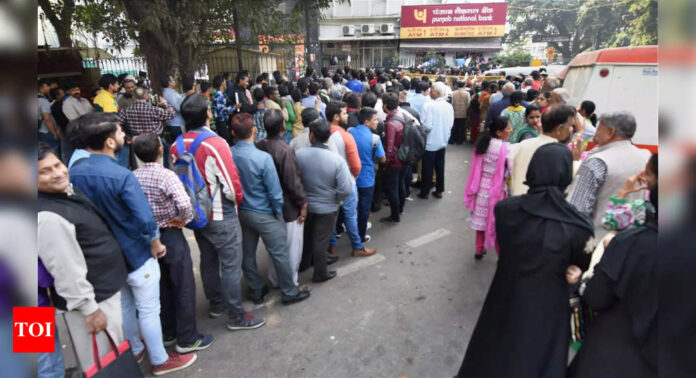 NEW DELHI: The BJP on Monday hailed the Supreme Court judgment upholding the government’s demonetisation exercise as “historic” and slammed the Congress for its campaign against the decision and asked if its leader Rahul Gandhi will tender an apology after the verdict.
The Supreme Court in a 4:1 majority verdict upheld the government’s 2016 decision to demonetise Rs 1,000 and Rs 500 denomination notes, saying the decision-making process was not flawed.
Former law minister and BJP leader Ravi Shankar Prasad asserted that the demonetisation done in 2016 proved to to be the “biggest blow” to terrorism by curbing terror funding. It boosted income tax and cleansed the economy, he claimed.
“It is a historic decision and is in national interest. The Supreme Court has held a decision taken in national interest valid. Will Rahul Gandhi now say sorry for his campaign against demonetisation. He spoke against it even abroad,” he said at a press conference.
Prasad also hit out at Congress leaders, especially former Union finance minister P Chidambaram, for highlighting the minority judgment. They are ignoring with impunity the majority verdict to make incharitable and scandalous statements, he said, slamming Chidambaram.
India has become a global leader in digital payment which was boosted after demonetisation, he told reporters, noting that the country notched up over 730 crore digital transactions worth over Rs 12 lakh crore in October this year alone.
The dissenting judge has also said the policy was well-intentioned, Prasad added.
A five-judge Constitution bench of the apex court, headed by Justice S A Nazeer, said there has to be great restraint in matters of economic policy and the court cannot supplant the wisdom of the executive by a judicial review of its decision.