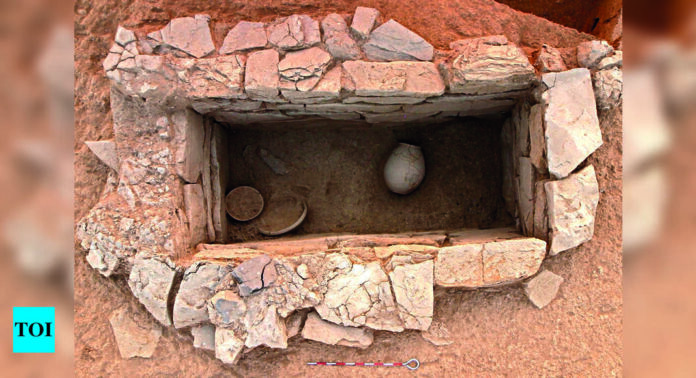 AHMEDABAD: Excavations at one of the biggest necropolises of the Harappan era in Gujarat have shown what history has repeatedly demonstrated around the world — ancient humans buried the dead with afterlife items like personal artefacts, sacred animals, and pots of food and water.
The digging began in 2019 at Juna Khatiya village, about 30km from Lakhpat in Kutch district, and archaeologists found rows of graves with skeletal remains, ceramic pots, plates and vases, beaded jewellery, and animal bones that piqued their interest. Over time, it emerged as one the biggest Harappan burial sites, with the possibility of 500 graves, of which about 125 have been found so far.
These are from 3,200 BCE to 2,600 BCE, predating Dholavira—a Unesco world heritage site—and several other Harappan sites in the state. The site is important because others like Dholavira have a cemetery in and around the town, but no major habitation has been discovered near Juna Khatiya, said Rajesh SV, excavation director and assistant professor of archaeology at University of Kerala.
The site demonstrates the transition from earth-mound burials to stone graves. The pottery from the site have features and style similar to those excavated from early Harappan sites in Sindh and Balochistan. “The artefacts can put the site in perspective of other pre-urban Harappan sites in Gujarat,” said Rajesh.
The rectangular graves were made of shale and sandstone, which are common rocks in the area, and other than items like clay bowls and dishes, prized possessions like beads and bangles of terracotta, seashells, and lapis lazuli were interred with dead.
“The majority of burial pits had five to six pots. In one, 62 pots were found. We have not found any metal artefact from the site so far,” said Rajesh.
“Some of the burial structures have boulders of basalt as coverings. Pebbles of local rock, basalt, soil, sand, etc were used for construction, and clay was used to bind them together,” said Rajesh, delivering a lecture at IIT Gandhinagar last week.
The vagaries of time have taken a toll on the graves buried for five millennia: soil erosion, tilling of the land for agriculture, plus vandals opening graves in their quest for ancient treasure. “We have only one fully intact skeleton, whereas many of the graves are devoid of any human remains,” Rajesh said.
His research team includes Abhayan GS of University of Kerala, Francesc C. Conesa from Spain’s Institute of Classical Archaeology, Juan Jose Garcia-Granero of Spanish National Research Council, and Subhash Bhandari of KSKV Kachchh University. “Multiple teams are working on aspects such as DNA analysis and isotope study,” Rajesh said.