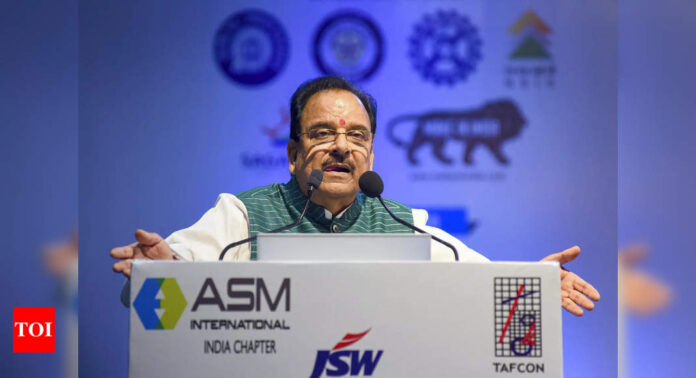 NEW DELHI: The government is making efforts to settle people along the areas close to the country’s International Borders, Union Minister Ajay Bhatt has said, adding that attention is also being given to the promotion of tourism in the bordering areas.
In an exclusive interview with IANS, Union Minister of State for Defence and Tourism Ajay Bhatt discussed a host of issues, including the recent Joshimath crisis.
While stating that the government has halted the work on several projects and other activities in Uttarakhand’s Joshimath, the Minister also discussed other issues related to modernisation of the armed forces and the Agniveer scheme. Here are some excerpts:
IANS: Could you tell us about what is being done towards resettlement of people along the border areas, border tourism and adventure tourism?
Bhatt: We have been putting a lot of emphasis on border tourism. Efforts are underway to make people resettle along the border areas. Prime Minister Narendra Modi had visited Mana — India’s last village near the International Border, ahead of Badrinath. Besides, there is a good scope of promoting border tourism in the northeastern region.
To promote border tourism, some programmes are being made, and some have already been implemented.
Climbing, scaling ice-clad peaks, river rafting are being organised. Also, in several areas, religious tourism is being promoted.
The Indian Army is taking several steps to promote adventurous tourism. Tours to Leh Ladakh are organised. Similar events would be held in Uttarakhand as well. That would motivate the youths (to join the armed forces).
IANS: What is the current situation in Joshimath after it emerged that cracks have appeared in hundreds of houses, hotels and other establishments there?
Bhatt: All activities related to work on the rope-way, water and electricity project have been stopped. The situation usually remains a bit tense whenever such an issue arises. While the Central government is monitoring the matter, the state government has shifted people to safer places.
Besides, necessary arrangements pertaining to food, water, medicine, doctor and all other essential facilities have also been made.
Uttarakhand Chief Minister Pushkar Singh Dhami held a meeting on the issue and several key decisions were taken.
For us, the priority is to shift the affected people to safer places under any circumstance.
IANS: What is the biggest challenge before the government right now over the Joshimath crisis?
Bhatt: Geologists have visited Joshimath and conducted surveys for two days. The report is likely to be submitted soon. They have also interacted with the local residents. Such challenges do emerge in the face of any disaster… besides, all the people have to move to safer places.
IANS: The Republic Day parade is about to be held on the Rajpath that has been named as ‘Kartavya Path’. You went there to see the arrangements too.
Bhatt: A parade would be held on the Kartavya Path for the first time. Prime Minister Narendra Modi has made a historic move by naming ‘Rajpath’ as ‘Kartavya Path’. I went there for an inspection because our department looks after all the arrangements. All the equipment of the Army will be displayed there.
IANS: The country has completed 75 years of Independence and India is also having the Presidency of G20. Do you think that enthusiasm would be seen this time in the Republic Day celebrations?
Bhatt: There is massive enthusiasm… and this year, there will be a historic attendance of people in the Republic Day celebrations. As soon as we launched the invitation portal for Republic Day celebrations, people started registering to come to the R-Day Celebrations in huge numbers from all over the country.
IANS: What will be the impact of Agniveer recruitment on the armed forces? Besides, a large number of youth are usually recruited in the Army from hill states such as Uttarakhand. What kind of opportunities would be available to them beyond the Agniveer scheme?
Bhatt: Our Army would become a technology oriented one… that would be the biggest impact. Even after the end of their services under the Agniveer scheme, they will have many good options. Under the Agniveer quota, these youth will get priority in getting jobs even after their military service. Besides, if an individual wishes, he/ she will be able to start his/ her own work.
IANS: What are the special initiatives being undertaken to modernise the Indian Army?
Bhatt: New weapons are being inducted into the Army, and a lot of emphasis has also been put on Information Technology. There has also been a lot of change in the training process of the Army.
IANS: Has the government selected any such tourism areas which will be developed from the world tourism perspective?
Bhatt: The most important thing we are doing currently is that we are highlighting our own things. The way these touristic areas should have been highlighted was not done earlier. In fact, the origin of the Saraswati river is also a place of interest!
Besides, Swargarohini is also an important place from a tourism point of view. We have hot water sources on the routes of Gangotri, Yamunotri, Kedarnath, Badrinath.
Also, Satopanth is an important sightseeing place which is ahead of Badrinath.