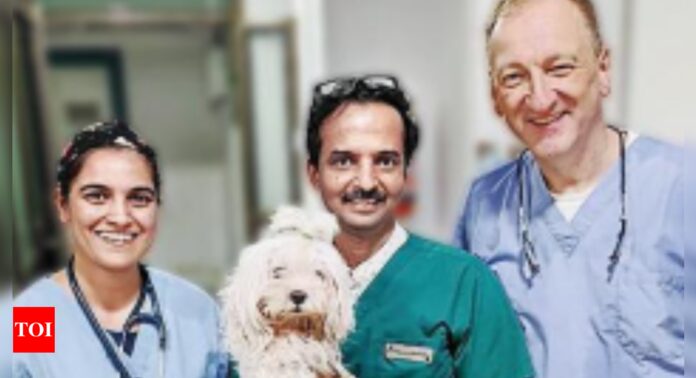 MUMBAI: A small-breed canine, pet to a family from Juhu, recently underwent an unusual surgery for a life-threatening heart condition. With that, the four-year-old dog of Maltese breed has got a new lease of life. Besides city veterinarians, a doctor was flown in from Germany to operate on the heart condition that the dog, Waffle, was born with.
The pet’s heart condition was discovered by chance. The tiny ball of fur came as a surprise gift to Juhu resident Rani Raj Wankawalla. When she first held him, she felt an “unusual sound and vibration” in her palms. When they took Waffle to the doctor, the vet confirmed the medical condition.
The family was told that the only way to correct it was to take the dog for a surgery to the UK, where a non-invasive operation would be done, said Dr Deepti Deshpande, consulting veterinary cardiologist and anaesthesiologist. “If done in India, it would have to be an open-heart surgery… So far, such surgeries have seen little success in India,” she said, adding that Waffle’s family was ready to take him abroad, but the Covid pandemic put a spanner in the works.
The congenital heart defect, called patent ductus arteriosus, was that there was free flow of blood between the two main vessels of the heart which had to be stopped. “If not, the condition could have proved fatal,” said Dr Deshpande. Dr Desphande got in touch with German cardiac surgeon Dr Matthias Frank who has performed such surgeries abroad. The life-saving surgery, called surgical ligation of ‘patent ductus artereosis’, was performed four weeks ago at Dr Makarand Chousalkar‘s clinic, Top Dog Pets Clinic, Andheri.
Four weeks after the surgery, Waffle is back to his mischievous ways, said Dr Chousalkar who was part of the surgery. Wankawalla said, “We are glad Waffle is full of life again.”