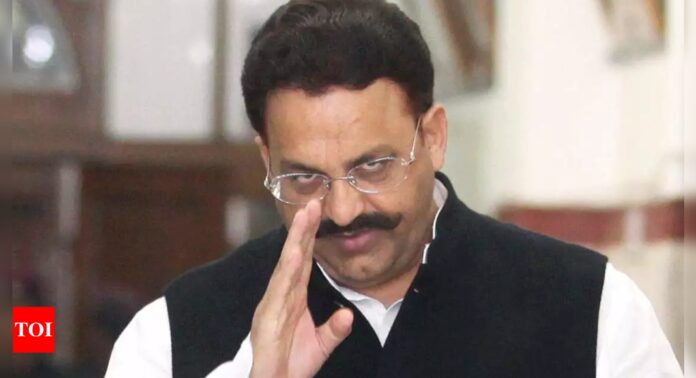 VARANASI: A day before being physically produced before the MP-MLA court in Ghazipur to give evidence against arch rival and mafia don Brijesh Singh in connection with the murderous attack on his fleet in Usarichatti in 2001, jailed mafia don-turned-politician Mukhtar Ansari was on Sunday booked in the case of his aide’s murder.
Shailendra Rai of Bihar’s Buxar, father of Manoj Rai, who was among the three people killed in Usarichatti shootout on July 15, 2001, lodged an FIR alleging that Mukhtar had murdered his son as he suspected that Manoj was working against the gang.
Inspector, Mohammadabad, Ashok Kumar Mishra said that on the complaint of Shailendra, a named FIR was lodged against Mukhtar, his driver Surendra Sharma, Shahid, Gaus Moinuddin and Kamal, under IPC sections 147 (rioting), 148 (rioting, armed with deadly weapons), 149 (unlawful assembly) and 302 (murder).

“My son Manoj was murdered by Mukhtar and his aides in 2001. Due to Mukhtar’s terror, I did not open my mouth but when I was convinced that stern action was being initiated against him, I decided to reveal the facts related to my son’s murder case and seek justice,” Shailendra said in his police complaint. He said Manoj worked for Mukhtar with full dedication but he filed some tenders in government departments without Mukhtar’s consent. “This irked Mukhtar, who threatened Manoj of dire consequences. Manoj and I apologised to Mukhtar after which he allowed Manoj to work with him on the condition that he would not betray him again,” he said.
“On July 14, 2001, Mukhtar’s driver Surendra along with Shahid, Gaus and Kamal reached my house and took Manoj with them claiming that Mukhtar had called him for some important work. The next day, we came to know that Manoj had been murdered,” he added.