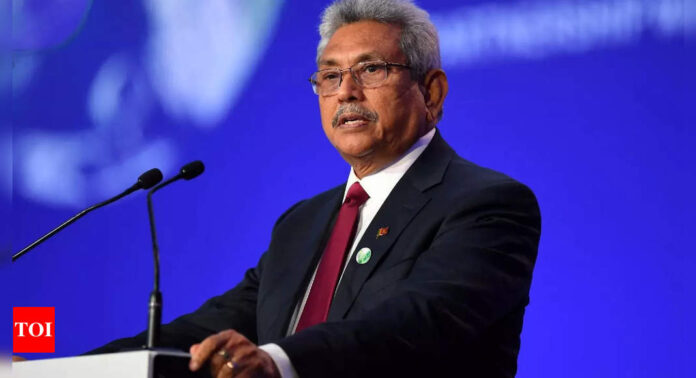 COLOMBO: Former President Gotabaya Rajapaksa, who was ousted from power last year over his government’s mishandling of the cash-strapped country’s economy, has returned from Dubai, his first foreign trip since returning to Sri Lanka four months ago.
Rajapaksa and his wife Ioma arrived at Bandaranaike International Airport here from Dubai on Thursday, the Daily Mirror Lanka newspaper reported, quoting the airport duty manager and spokesperson of the airport immigration department.
They arrived on an Emirates flight EK-650 from Dubai, the report said.
During his visit to Dubai, Rajapaksa visited the exotic animal farm called “Fame Park,” according to news portal newsfirst.lk.
Rajapaksa,73, fled Sri Lanka to the Maldives on a Sri Lankan Airforce plane in July, as the country plunged into its worst economic and humanitarian crisis since its independence from Great Britain in 1948.
He then proceeded to Singapore, from where he submitted his resignation on July 14.
Weeks later, he flew to Thailand, seeking temporary shelter.
Thailand said Rajapaksa can stay in the country for 90 days because he is still a diplomatic passport holder.
However, he was not allowed to engage in political activities in Thailand.
He was confined to a hotel and surrounded by security personnel.
In September 2022, he was given special security and a state bungalow upon his return to Sri Lanka from Thailand.
Rajapaksa, an ex-military officer, became the president in November 2019.
Rajapaksa, formerly a dual citizen of both Sri Lanka and the US, had to give up his US citizenship ahead of the 2019 presidential elections.
As per Sri Lankan Constitution, dual citizenship holders are barred from contesting elections.
A corruption case against him when he was a top defence official was withdrawn soon after he was elected in 2019.
Earlier this month, Rajapaksa applied for restoration of his US citizenship after he failed to get asylum in any country, according to The Sunday Times newspaper. However, the US government is yet to consider the request, newspaper reported. The Rajapaksa family has dominated Sri Lankan politics for over two decades.
Mahinda Rajapaksa, the 76-year-old patriarch and elder brother of Gotabaya was the country’s president and prime minister.
Younger brother Basil Rajapaksa, 71, was earlier finance minister.
Sri Lanka, a country of 22 million people, is going through its worst economic crisis since its independence in 1948 which was triggered by a severe paucity of foreign exchange reserves.
In September, the IMF announced that it will provide Sri Lanka with a loan of about $2.9 billion over four years under a preliminary agreement to help the bankrupt island nation tide over its worst economic crisis and protect the livelihoods of the people.
The country is also expected to restructure its debt worth $29 billion, with Japan expected to coordinate with other creditor nations, including China on this issue.
In mid-April, Sri Lanka declared its international debt default due to the forex crisis.
The country owes $51 billion in foreign debt, of which $28 billion must be paid by 2027.
There have been street protests in Sri Lanka against the government since early April due to its mishandling of the economic crisis.
A crippling shortage of foreign reserves has led to long queues for fuel, cooking gas, and other essentials while power cuts and soaring food prices have heaped misery on the people.