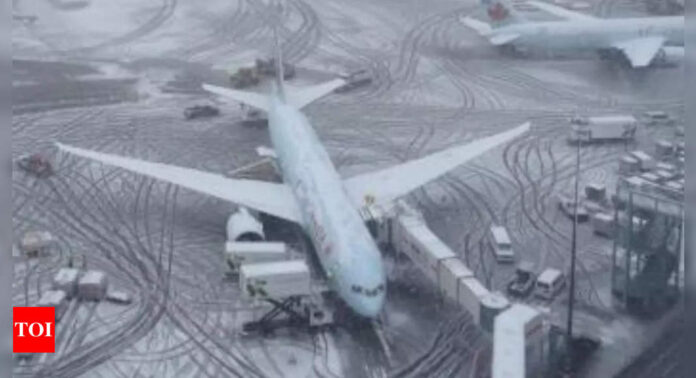 SRINAGAR: Fresh snowfall in various parts of Kashmir impacted flight operations and led to the closure of Jammu-Srinagar national highway on Friday, cutting off the valley from the rest of the country. Jammu and Kashmir also saw widespread rains on Friday, while avalanche warnings were issued in 10 districts for the next 24 hours.
From Saturday, however, J&K is expected to witness a five-day dry spell, according to the weatherman.
All flights to and from Srinagar were initially suspended and later cancelled after 10 am due to continuous snowfall and poor visibility, an airport official said. The air traffic will resume after the weather improves. The passengers booked on the cancelled flights would be accommodated by the respective airlines in the next available flight at no extra cost, airport authorities said.
The Jammu-Srinagar highway, the only surface link connecting Kashmir Valley with the outside world, was closed due to shooting stones and mudslides near Mehar in Ramban district, officials said.
“Clearance work is underway on the highway. People are advised to undertake (a) journey on (the) highway only after confirming (the) status from traffic control units,” the traffic department said in a tweet.
The J&K Disaster Management Authority issued avalanche warnings for the next 24 hours as heavy snowfall continued since morning in the upper reaches of Srinagar and other parts of the valley.
Avalanches with high danger level are likely to occur above 2,000 metres in Bandipora and Kupwara districts, with medium danger level above 2,000 metres in Baramulla and Ganderbal districts and with low danger level above 2,000 metres in Anantnag, Doda, Kishtwar, Kulgam, Poonch and Ramban districts. People living in these areas were advised to avoid venturing out.
According to the meteorological department, many parts of J&K saw light to moderate rains, including Srinagar, Kupwara, Qazigund, Kokernag, Pahalgam, Jammu and Katra.
The wet weather slightly pushed up the night temperatures. Srinagar recorded a low of 1.0°C against minus 0.2°C the previous night. Friday’s minimum temperature was 3.1°C above normal for the summer capital, met officials said. Qazigund and Pahalgam, Kokernag, Gulmarg and Kupwara, too saw, increase in minimum temperatures by varying degrees.
According to Mukhtar Ahmad, deputy director in the meteorological department, the weather conditions would improve in the next few hours in the plains. He said it would remain largely dry from January 14 till January 18.
However, a fresh western disturbance was likely to affect J&K and adjoining areas on January 19-20 and there was a possibility of light to moderate snowfall at most places in Kashmir on January 23, a met official said.