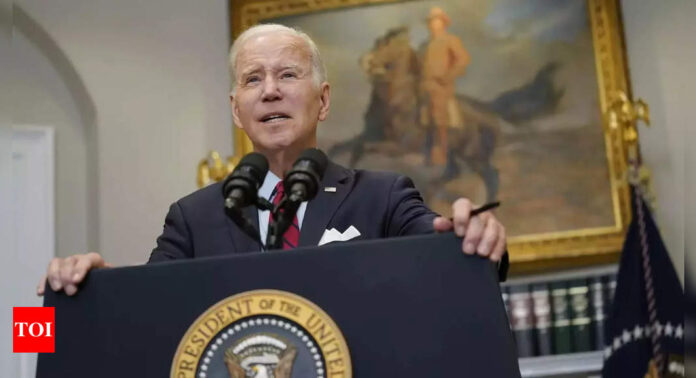 WASHINGTON: The United States will expand Trump-era restrictions to rapidly expel Cuban, Nicaraguan and Haitian migrants caught illegally crossing the US-Mexico border, President Joe Biden said on Thursday in his first major speech on border security.
At the same time, the United States will allow up to 30,000 people from those three countries plus Venezuela to enter the country by air each month, Biden said.
The two-pronged approach is designed to blunt criticism from Republicans who have attacked Biden as record numbers of migrants cross the US-Mexico border while also placating Democrats and immigration advocates who say “Title 42” restrictions adopted under former President Donald Trump block migrants from exercising their right to apply for asylum.
“This new process is orderly, it’s safe and it’s humane,” Biden said in a speech at the White House. He said his message to those would-be migrants from Cuba, Nicaragua or Haiti without a US sponsor is: “Do not just show up at the border.”
In November, US border officials encountered 82,000 migrants from those countries and Venezuela who were attempting to enter without permission at the border with Mexico, according to US government data.
The plan is part of a broader effort to deter record numbers of border crossers and address the political and humanitarian challenge of mass migration that has dogged the Democratic president since he took office in 2021, as well as his predecessors from both parties.
“These actions alone are not going to fix our entire immigration system,” Biden said, but they could “help a good deal.”
Democratic lawmakers including Senator Bob Menendez have criticized the expansion of these policies, which on Thursday he called “a disastrous and inhumane relic of the Trump administration’s racist immigration agenda.”
Republicans have criticized Biden for what they describe as lax border enforcement and have rejected the president’s proposals for immigration reform and related funding in Congress.
Biden defended the role immigrants play and asserted a US responsibility to accept persecuted people from around globe.
The US government can use existing resources to deport migrants and process asylum seekers, but US officials say the system will be slowed until Congress approves funds for more resources.
“We don’t have enough immigration judges to adjudicate the claims,” Biden said.
EL PASO BORDER STOP
Biden will visit El Paso, Texas, on Sunday, his first trip to the border with Mexico since taking office.
El Paso, a Democratic stronghold with a history of welcoming immigrants, has struggled in recent months to cope with tens of thousands of migrants crossing the border from Mexico.
Discussion of immigration is expected to be a priority when Biden travels to Mexico City for a summit next Tuesday with Mexican President Andres Manuel Lopez Obrador and Canadian Prime Minister Justin Trudeau.
In response to Biden’s actions, Mexico’s government said Washington had “responded positively” to Mexico’s requests to expand labor and humanitarian opportunities for migrants in the region. Mexico said the US plan would also expand refugee resettlement policies.
The cap of 30,000 a people a month offers a “significant alternative to irregular migratory flows that can carry significant risks for the safety of migrants and refugees,” Mexico’s government said in a statement.
If the humanitarian access applications are filled, for a total of 360,000 people in 2023, it would represent the biggest increase in U.S. labor opportunities for migrants in recent years, it said.
Under the plan announced on Thursday, Mexico will accept up to 30,000 expelled migrants per month from Cuba, Nicaragua, Haiti and Venezuela. Migrants who cannot be expelled back to Mexico increasingly will be subjected to a rapid deportation process known as “expedited removal,” a senior official said.
Reuters reported last week that the Biden administration planned to implement the new curbs and entry program.
The policy change follows a US Supreme Court ruling in late December that the pandemic-era restrictions, known as Title 42, must stay in place for what could be months as a legal battle plays out.
The Biden administration intends to propose a regulation that would restrict asylum access at the border if migrants do not follow the new processes or if they pass through another country en route to the United States without seeking protection there, US Homeland Security Secretary Alejandro Mayorkas said at a news conference.
Similar limits on asylum access during the Trump years drew opposition from advocates and were blocked by federal courts.
Mayorkas said the Biden restrictions would be different because migrants would be able to apply to enter the United States through new legal pathways, bringing “order and safety” to the asylum process.