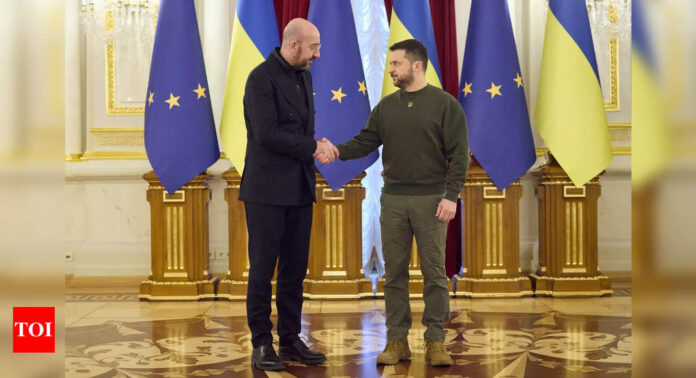 KYIV: European Union chairman, Charles Michel, arrived in Kyiv on Thursday for talks about the bloc’s support for Ukraine as it fights a Russian invasion, and reforms needed in the ex-Soviet republic to one day join the European alliance.
Two weeks before an EU-Ukraine summit on Feb. 3, Michel, who chairs meetings of the EU’s 27 national leaders, posted a photograph of himself on Twitter from a train platform, saying: “Back in Kyiv to discuss all strands of cooperation … May 2023 be the year of victory and peace.”
Michel said a day earlier he was personally in favour of the West providing tanks to Ukraine.
“We will work with (EU) member states to make this happen,” an EU official and an aide to Michel told Reuters. “Ahead of the EU-Ukraine summit, it’s best to pinpoint with (Ukrainian President Volodymyr) Zelenskyy what is most urgently needed and where we can boost our support.”
In a major geopolitical move, the EU awarded Ukraine membership candidate status last year, and the official said Kyiv would need further reforms on the rule of law in order to be able to join the bloc one day after the war ends.
As the first anniversary of Russia’s invasion nears, the 27-nation EU is giving Ukraine 18 billion euros worth of financial support in 2023, considering adding German Leopard tanks to the list of arms it already provides to Kyiv, and mulling a tenth package of sanctions against Russia.
The bloc is also aiding investigations into alleged war crimes committed during Russia’s invasion and supporting the creation of a dedicated international tribunal to prosecute Russia’s political and military leadership for attacking their neighbour.